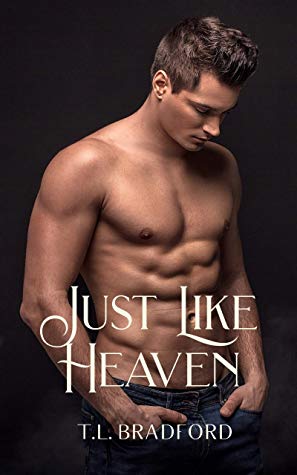 What do you covet?

Josh Hill
Josh Hill is up a creek and sinking fast. He’s got no job, no money, no credit and is about to be kicked out of his apartment. Opportunity comes in the form of a job offer from the show Americana. Everything should be perfect; only there is one hitch. He will be the new love interest for Noah Sinclair’s character on the beloved show.

So, opposites are supposed to attract, right? Not so fast. No one said life was that easy. Both actors find themselves in untested waters. Will they be able to play a same-sex couple with no prior experience authentically? Well, they say practice makes perfect.

Carefree, fun-loving Josh and uptight, overbearing Noah, realize they need to make the best of their bad situation and are forced to find common ground. Over time, their roles in each other’s lives become blurred. Is their attraction fake, or is it real? To top it off, Noah has a dark skeleton in his closet that can prevent them from ever moving forward.

Can they get on the same page and save both of their careers and their relationship?

Or will they end up yesterday’s tabloid fodder?

I have no clue what this meeting is about, and I am not in the mood to be dealing with Steph and Genie’s crap today. Some random stagehand just came back here to let me know my attendance was required. I try to think back and wonder if I personally offended anybody yet today. Hmm… Nope. Not today, anyway.

Steph and Genie are the producers for the show I star on called Americana. It’s a newer concept in programming. The show streams daily on Netflix as an evening drama. Small town life under a microscope is the idea. It’s a modern-day spin on a soap opera really, but there is no way on earth I am admitting to working on a soap opera. The show itself is heavily ingrained in social media where the characters have taken on a life all their own. It’s been almost two years now since they cast me, and the show has been live.

I graduated from college several years ago. After that, I spent a couple of years bar tending and serving. With good parts so scarce, I was lucky to get this opportunity. The show has been a ratings winner, and the entire cast is becoming well known.

What drew me to the part was its unique take on the dissection of America and how different communities have changed over time. Our show takes place in America’s heartland. It focuses on the lives and loves of the residents of Greenfield, Indiana.

My character, Jace, is the town barkeeper. He was a great role to play early on because he had a lot of interaction with the main cast. Lately, though, something has changed, and I’m not feeling in touch with the character as much as I once did. It’s showing in my performance, so I’m sure that’s what this meeting is about.

I’ll bet it has to do with me flubbing lines lately. I haven’t been able to focus, and it looks like they have noticed. My part is getting reduced to nothing. Maybe this is the kick in the pants I need to move on. Ash, one of my castmates on the show, mentioned that they are having open auditions for a new show on FOX. Who knows, it may work out for a season or two. The only thing is that FOX has a bad reputation for short-term junky shows.

Maybe they aren’t going to renew my contract. Oh god. I’m being sacked. I can see it now. Gah, I’m already planning my pity party table for one.

I reluctantly get up from my chair, padding out of the room, trying hard not to make eye contact with anyone. I arrive at the end of the hall and hold my hand on the doorknob. “Okay here it goes,” I say to no one in particular.

I enter the room and see Genie and Steph seated across from each other around a large square glass table. Steph is probably in his early 40s, (never can tell for sure in Hollywood), smallish frame with short sandy brown hair, mischievous eyes and a car salesman smile. He is kicking back with his half-eaten Subway sandwich hanging out of his mouth.

Genie looks up to see me. She has her requisite Starbucks Spiced Vanilla Chai Latte and is eating some salad that looks unhealthier than Steph’s meatball sub. “Noah, right on time, per usual.”

Steph says, “Come on in and take a seat. Shut the door behind you.”

Oh boy, that doesn’t sound good. I move toward the desk, taking a chair next to the window, moving it in close next to Genie. The smell of the eggs on her salad is strong. Steph takes a napkin to his lips to wipe the marinara sauce off and starts talking.

“Noah, you’ve been here for over a year, right?”

“So, you’re up for contract negotiations then, right?”

“Yeah, I haven’t talked with my agent about it yet.”

“Well, that is what Genie and I would like to discuss.”

I swear the smell of the eggs is getting stronger. It is permeating the entire atmosphere.

“You know we get the daily stats on the show’s overall performance and having talked; we decided we are going to have to make some changes.”

It’s coming. I feel it. With the show being purely streaming, it is easy for the showrunners to pull up all types of analytics on the show, like what age group is watching, and income bracket. Annoyingly, they can also track what parts of the show are being watched and skipped over. A favorite character will have higher click averages than a third tier one. With my part being scaled back so much, I’m fairly sure my numbers are in the gutter. For sure I’m getting the boot. I start sweating.

Genie jumps in and says, “Your numbers have been pretty consistent, but not growing at the pace we would like to see.” All I can smell now is the nauseating stench of eggs. I am going to puke. Right here. Right now. Right on their fancy $3000 glass table.

Genie looks at me with concern in her eyes. “Are you okay? You don’t look so hot. Would you like a glass of water?” She jumps up from the table to grab me a glass. Her dark hair is nearly falling out of the messy bun at the back of her head.

“Yeah, that would be great.” She comes back and sets the glass down in front of me. I pick it up and drink slowly. My throat is constricted, and I nearly choke. She is still concerned and looks over to Steph. She pushes her black-framed glasses up on her nose and turns back to me.

Sensing my stress, she quickly says, “We are thinking of taking your character into a new direction.”

“A new direction? Okay, what were you guys thinking about?”

Steph says, “We’ve done some marketing research and have found some niches that we think will work well for our show.” He crams in another mouthful of sub.

Ever the tag team, Genie says, “It’s a direction that may be more challenging, but we think given your range that you would best be able to play the role.”

“What’s the direction you were thinking?”

She looks over to Steph, then back at me. “Your character, Jace Alexander will enter into a relationship with a new character, named Max.”

“Max? Well, what is Maxine’s backstory?” I let out a huge breath. They had me there for a minute.

Slowly my head starts to wrap around what they are saying. “So, wait, Max is a guy?”

“Look, Noah, I know this is a real shock, but think of it this way. You will have a unique storyline, and it will get people back into your character again,” says Steph. “It’s been what, a year now since Jace broke up with Gracie? The character has just been drifting, and we need to get that viewership back.”

“Are you kidding me? How the hell am I supposed to play gay? This is so far out of my league. I—”

“I’m going to be honest with you,” Steph says, finally having put this sub down. “Genie and I had to go to bat for you to keep you on the show. They were ready to cut you. We pulled this idea out that we had a little while ago and they went for it. So basically, you stay on the show on the condition that you accept this storyline. Otherwise, they are releasing you at the end of your contract.”

I sit back in my chair, dumbstruck. I look between the two of them and see there is no way out. I have no words.

Genie says, “I know you feel blindsided and I don’t blame you for being upset but think about this rationally. This is the opportunity you have been waiting for. A chance to stretch your acting skills.”

Then she pulls forward in her chair, she grabs my hand and looks me in the eye. “You don’t have to answer right now. Think about it over the weekend, and we can all talk about it again on Monday.”

I don’t say a word, still unmoving and dazed.

“We have an audition video for the actor we have in mind. Why don’t you take this copy and see if you think you can make this work?”

Wordlessly, I take the flash drive and get up to leave. I go back to my dressing room and finally lose the contents of my stomach.

T.L. always hated math, so it was a good thing she had a way with words. Since she was a shy and quirky kid; words were her best friends. She would imagine entire worlds in her head and talk to herself endlessly. Her mother wondered if she was speaking with ghosts for a while.

Her older sister was a voracious reader of trashy romance novels and would pass them down to her after she had finished them. T.L. was the only 10-year-old kid sitting in class reading “The Stud” by Jackie Collins during reading time. Oddly enough, she never got called out on it.

As she grew older, her tastes evolved, but one thing held fast; her undying attachment to love stories. One day out of the blue, she decided to write the love stories she always wanted to read instead of searching for her story. Since then, writing has been a dream fulfilled for her and she could not be happier.

She enjoys writing about love, regardless of gender and is a proud supporter of the LGBTQ community.

T.L. calls the Pacific Northwest her home and enjoys the quiet rural life of her little oceanside home with her playful/crazy husband and their giant dog Noah.

Enter the Rafflecopter Giveaway for a chance to win a $10 Amazon Gift Card. 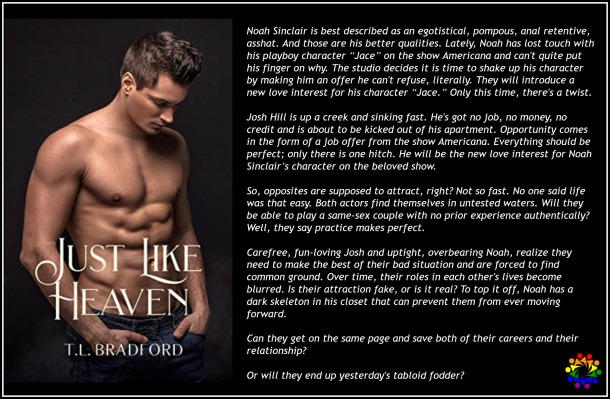