Book Title: Made in Lisbon (Made In Series Book 5) 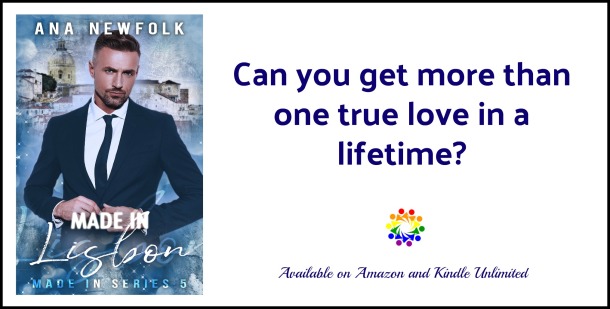 Three years after his husband’s death, Vitor is still grieving. Too young to be alone and too old to start again, he feels stuck. Accepting a new job in Lisbon is just what he needs, but it also means going back to the city that sealed his fate nearly thirty years ago.

Between looking for his missing brother and running an LGBTQ Youth Center, Tiago doesn’t have time for dating or commitment. When his best friend asks him to find a family member that ran away years ago, Tiago welcomes the distraction.

A past full of secrets.

An anonymous kiss that turns their world upside down.

When past and present clash, will the two men put everything aside and give themselves a chance at happiness? Or are the things keeping them apart stronger than their feelings?

Made In Lisbon is a 60k word May-December MM romance with hurt/comfort themes, lots of steam and a HEA.

Made In Lisbon can be read as a standalone but will be better enjoyed as part of the Made In Series as characters and stories from previous books appear in this story. 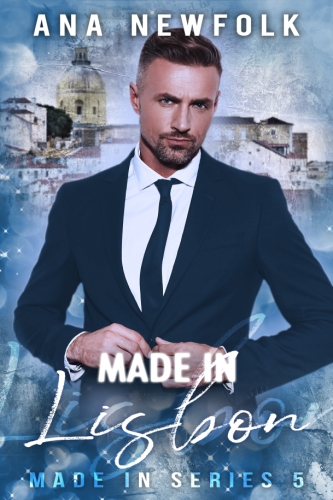 The doorbell rang right on time.

“Hey, sweets, how are you doing?” Luís asked before enveloping me in one of his big bear hugs. I allowed myself to melt into it before I answered.

I’d met Luís on the same night I’d met Rodrigo at a student party. I’d been talking to Luís and had thought he was cute, but Rodrigo stole my heart from the first moment our eyes met. When Dri had stolen me away at the party I’d thought I’d never see Luís again, but when we’d bumped into each other at the university campus a few days later, we went out for coffee and ended up becoming good friends.

“Are you really okay?” He put a hand on my chin to tilt my head up so I could look him in the eye.

“I was going through Dri’s shirts earlier and it brought back some memories. Hey, I don’t suppose you want his shirts? You’re the same size.” Despite asking the question I was relieved when Luís said he didn’t feel right taking the shirts, and besides, he didn’t have any use for them since he was an artist and spent more time covered in paint than in nice clothes.

“So, where’s this dinner then? I’ve not eaten since breakfast in anticipation. And since the others aren’t here, I expect a mega portion.”

I smiled and guided him to the kitchen.

This house was Rodrigo’s indulgence. When he’d asked me to marry him, even before it was legal for two men to marry in Portugal, he’d promised he’d design the best house in the country. I never needed something so big, but the kitchen was the one part of the house I was grateful I’d allowed him to indulge in the design.

The food was perfect as always, then again, cooking this meal most Sundays for nearly thirty years, I could almost do it wearing a blindfold.

We ate mostly in silence, which was welcome because I was feeling out of sorts. I also wondered what was in Luís’ mind. In the nearly thirty years I’d known him I’d never seen him go longer than a few minutes without talking. Even when we were younger, he’d always been the one who would bring someone into the conversation by asking the right questions and making them feel like they were the only person in the room.

That was how he’d got me talking that night in the bar, until a single look from Rodrigo had made me feel like he and I were the only people on the planet.

The thought made me shiver. Luís looked at me but didn’t say anything.

Since it was just the two of us, I hadn’t bothered making dessert, but I had made an effort to get Luís’ favorite pastries.

“Have I ever told you how much I love you?” Luís said before stealing one of the mini palmiers part dipped in chocolate with a sprinkle of coconut.

We took our coffees and a plate with the tiny pastries and sat in the living room facing the garden.

“What’s going on?” Luís asked before I had a chance to take a sip from my coffee.

I took a deep sigh. What could I tell him? That I felt like part of me had died with my husband and the other part was slowly dying because my son wouldn’t talk to me? That I hated going to work because the desk next to mine was empty? Was three years too long to still be missing him? Or not long enough?

“Talk to me, sweets,” Luís said, putting his hand on my cheek and rubbing his thumb gently over my skin. I always loved how tactile Luís was, almost like touching people was part of his language.

“I don’t know what to say. I feel lost without Dri and Mateus won’t talk to me. I don’t know how to handle it all on my own.”

Ana Newfolk was born in Portugal but has lived in the United Kingdom for so long, even her friends sometimes doubt if she really is Portuguese.

After getting hooked on reading gay romance, Ana decided to follow her lifelong dream of becoming an author.

These days you can find her in front of her laptop bringing her stories to life, or in the kitchen perfecting her recipe for the famous Portuguese custard tarts.

your choice of ebook from the author’s backlist or 1 x $10 Amazon Gift Card. 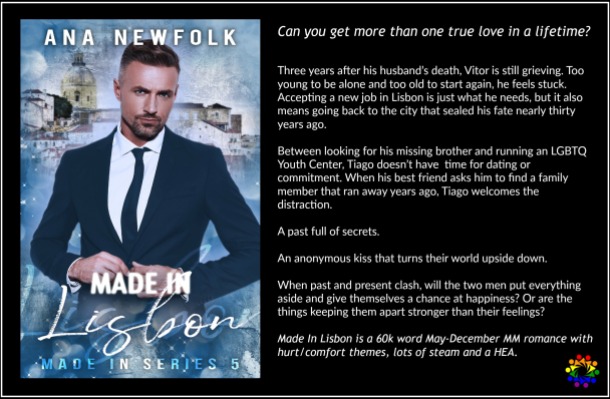