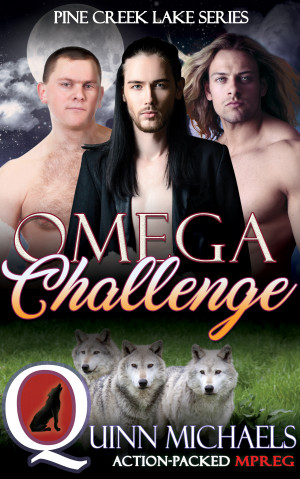 Link to chapters and all platforms

Noah and Luther are in love. The problem, Luther is a beta, Noah is an omega, and their mating is forbidden. Worse, if Noah can’t find an acceptable alpha in the next three days, he will have no choice but to mate with Raymond, an alpha he despises.

Then Arthur arrives, and everything falls apart.

Arthur is an alpha with a secret. He and his mother were betrayed, and both wear the mark of it. Now, Arthur will stop at nothing to make the alpha who cursed them pay. Now, with revenge in his teeth, Arthur’s own body betrays him. Twice. Will Arthur sacrifice love and happiness for vengeance? Or will he choose another path?

Find out in Omega Challenge an action-packed Omegaverse romance. This is a short book set prior to the events of the other three books of the Pine Creek Lake series.

The rock was red and rust-brown with fallen blood when the stranger approached.

He was large, blonde with a scruffy beard and a patch over his left eye. His right eye was gray. He wore a wide-brimmed cowboy hat, riding shirt and dungarees. Even from a distance, even through the smell of blood, this alpha’s scent was powerful. Noah felt something inside of him stir, like a vibrating banjo string only he could hear. To his embarrassment, his cock thickened.

Noah quickly averted his gaze. He took a gulp from a glass of lemonade he had been holding, and then, still feeling thirsty, he drank the last of it down.

Luther grazed his fingers over Noah’s neck, a seemingly absent touch, but one that grounded Noah. He didn’t dare look at the beta. His face was hot. He loved Luther, and this sudden attraction was a betrayal of the promises he’d made himself.

If only the alpha would leave. But no, he took his place in line behind another pair of alphas preparing to shed their blood and enter the Cluiche.

The stranger had a scar running from his hairline down his temple and beneath the eyepatch to the center of his cheek. Noah’s sight flashed. He saw a young, female omega wolf snapping her teeth. The edges of her muzzle were splattered with blood.

Noah blinked. In his moon vision, the alpha’s scar was a shimmering silver line.

The alpha approached the rock. “This is where I bleed for the challenge?”

Horace was quiet, and Noah scented fear on him.

“Yes,” Noah said. The vision was beginning to fade, thankfully, but he couldn’t push away his attraction.

In one fluid motion, the stranger swiped a silver dagger over his palm. Squeezing his hand tight, he let three drops fall on to the stone. “I am Arthur, son of Marion,” he said, giving his family line and no pack affiliation.

Odd considering his youth and obvious physical strength. A small pack would have wanted an alpha and accepted him unless he had some deeper problem of disposition or character. Or maybe he was entering the Cluiche with the intention of proving himself so that he might join one of the packs here?

The stranger, Arthur turned to leave.

The stranger turned back around. He cocked his head. “Yes?”

“Show us your eye. Under the patch.”

Horace didn’t have the sight. He hadn’t seen the scar shimmer, had he?

Noah leaned towards Horace and whispered, “He’s right. There’s no reason to embarrass him this way.”

Arthur reached up and, taking the patch in a tight, almost white-knuckled grip, yanked it down. Where Noah had expected to see a hollow space, scarred and sewn over, the eye was amber. A wolf’s eye with the pupil rimmed in red and a line of white through the center, following the path of his scar.

Noah’s breath caught. Around him, the others went silent.

Pennsylvania native, Quinn Michaels loves fantasy, werewolves and M/M mpreg romance! Her goal is to write action-packed adventures of romance, self-discovery, and second chances, all served up with a hefty helping of sweet, sexy Omegas and hot, determined Alphas who will do anything to cherish, love, and protect them. She is ecstatic to share her characters and worlds, and she hopes you enjoy them (and the sexy times!)

Her books are available on Kindle, via Gumroad directly, and also on Nook, iBooks, Kobo & Google Play.