Trope/s: Gay couple building a relationship in a small town

Themes: Facing the past to create a better future

Tagline Handyman Ed Stephens is back, exploring the past to build a future with his partner Rick in THE HANDYMAN’S HISTORY. Blurb “Sometimes I feel like it’s their world, and we’re allowed to live in it.” –Gordy Smith in The Handyman’s History The year since the death of their beloved benefactress Hilda Penfield has been a busy and sometimes stressful one for Handyman Ed Stephens and his partner, Rick Benton. They hope some peace and quiet will return to Penfield Manor after they host the wedding of Rick’s sister Claire to Matt Croasdale. Instead, Ed and Rick both find themselves involved in new activities. As Rick’s boss, Realtor Vince Cummings, becomes aware of the opportunities available in the sudden expansion of Porterfield, he and Rick become the guiding forces for a major redevelopment project. Meanwhile, Ed’s innocent suggestions regarding the revival of a local festival leads to him becoming a member of the Porterfield Days Association, and the acceptance of additional responsibilities. It’s Rick’s discovery of a tombstone in a disused town cemetery that sparks Ed’s curiosity about the background of his father’s family. Ed begins to question the relationship he had with his deceased father, and hopes learning some of the Stephens family secrets will enable him to make peace with his unresolved feelings. The usual cast of suspects is back to both enrich and complicate Ed’s life: His sharp-tongued but supportive mother Norma, his sister Laurie, and housekeeper Effie Maude, who maintains her position at Penfield Manor, and provides amusement for Ed and Rick with her observations and pronouncements. Their best bud Gordy is on the scene as well, struggling to build a relationship in the early years of AIDS. Even Ed gets a taste of the hostility becoming more common as fear of the disease spreads. As Ed deals with the realities of being a gay man in a small town in 1985, he unexpectedly finds support from two unlikely sources, a visually impaired client, and a clergyman new to the town. The Handyman’s History, with its soundtrack of classic oldies, will take its readers both forward and backward in the continuing saga of Ed and Rick, as their relationship strengthens, matures, and endures.

Excerpt Ed looked at him, not really seeing him, thinking back to those Saturday nights spent in the bleachers of the Porterfield gym, hooting and hollering for those perennial losers, the Bobcats. There he was – shy, skinny Ed Stephens, along with Fat Ted, Science Nerd Greg, and Four Eyes Steve, all pretending to be part of the crowd, but knowing the minute they left the Bobcat cheer block they’d be ignored by the cool kids, as usual. Ed remembered what Gordy had said last weekend: Sometimes I feel as though it’s their world and we’re allowed to live in it. He had certainly felt that way in high school. He wondered if his friends back then felt the same way. Perhaps they did, but Ed was sure it was harder on him because he was toting a secret burden that the others didn’t have. He was trying his best to pretend he wasn’t a homosexual. “I lied,” he said abruptly. “About those nights at Chef’s Inn; they weren’t a blast. They sucked.” Rick looked at him seriously. “Oh?” “Yeah. I never felt comfortable. Not really. I guess I just want to remember them as being a blast, you know?” “High school,” Rick sighed. “Baby, you’re preaching to the choir, remember? I was so alone back then, so miserable. I don’t even want to think how many times I contemplated suicide. I’m just grateful it’s over with.” “But don’t you sometimes wish,” Ed persisted, “that it was a blast? We had the best music ever, the cars were cool, and so were the movies and TV shows. It seems like it should have been fun.” “The music was great,” Rick admitted. “The people at Broad Ripple High, however, were not. I hated it, and I don’t think that makes you or me any different from all those other guys like us. In fact, if there is a homosexual out there who was really happy in high school I hope I never met him, ‘cause I’d probably have to kill him.” Ed chuckled. “And about the music, well, we’ve got it. I mean, you’ve still got all your records, and we listen to them all the time because we still love those songs so much. It belongs to us. It’s one thing we were able to salvage from those years. And I think music kind of helps to wash away some of the sadness, you know; kind of like putting rose colored glass on the memories to make them prettier.” Ed thought about Rick’s words. “That’s pretty good,” he said in admiration. Rick grinned. “Yeah, it is, isn’t it? Anyway,” he said dropping the newspaper and picking up the book he was currently reading, “I guess that’s how I can compromise the whole thing in my head and not go crazy.” Ed stood up and stretched, feeling restless. Arnie came into the room, looking for him. Ed picked up the cat and headed for the stairs. “I thought you’d be going to the den to drool over the guy Solid Gold dancers,” Rick said. “Eeh. I’m not in the mood for drooling. I think I’ll go upstairs and find something to read. “Besides,” he said with a leer at Rick. “If I’m patient I still get to have you all to myself tomorrow night.” Rick’s smile for him was as warm and tender as it ever had been. “It’s a date, baby. Count on it.” Ed slowly walked upstairs, cradling the cat more for his own comfort than Arnie’s. He was suddenly very tired, but also incredibly grateful that Rick was in his life.

Nick Poff lives in Fort Wayne, Indiana. The Handyman’s History is his fourth novel. Learn more about his work at www.nickpoffauthor.com , on Facebook at “Nick Poff Author,” and on Amazon’s Author Central. You can also find him at www.patreon.com/nickpoff. His short story, Lucky, is available on Amazon Kindle. 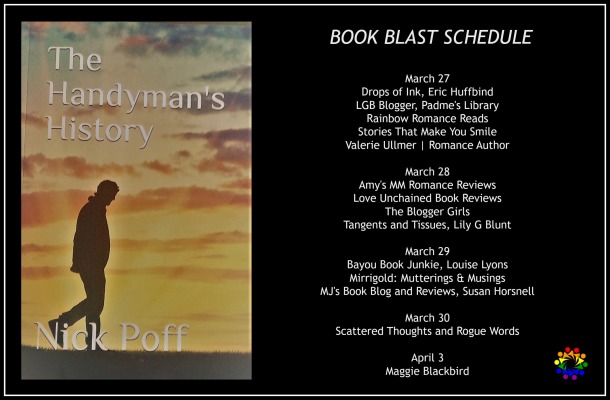 BLOG TOUR: “You or No One” by Oliver Bosman