Bernard Covington, suicidal and not the most-handsome man in the world would be happy to leave the world behind altogether. That is until he meets Dr. Jack Larson. The physician takes his wounded heart and soul and patches them back together, but is he Mr.Perfect?

Bernard and Jack develop a romance, but soon the tide begins to shift as Jack’s past is revealed and it becomes a game-changer for the couple to deal with.

Will Bernard and Jack have a happy ending or will he succumb to his desire to end it all or will dealing with Jack’s phantoms keep him going? Only Bernard’s diary knows what secrets lurk in his soul…

Bernard sat on his bed after another long day at the hotel just a few miles away. He was a bellhop.

Not the most glamorous profession, but the only one he could get years ago when his life plans changed drastically. He raked his fingers through his thick salt-n-pepper hair and yawned wide. He reached down and opened up his nightstand drawer and pulled out his journal. He flipped to an open page and plucked off the pen that was attached to the outside and clicked the point down.

I can’t hold this in much longer. Jeremy makes me want to explode every time I get near that incredible body of his! He’s such a good customer, tips well, and never has much luggage. I love bringing up room service to him…I wish it were me that was staying behind in the room with him. I have to tell him how I feel; he must suspect something by now. I’d give anything to have a real man in my life for once, just once! Something’s gotta change in a big way or…shit. I’ve just, I’ve got to do this before I fall apart and die a 46-yr-old virgin. Wishing myself luck!

August 8th. 10 p.m. The blinding red and blue strobing from the ambulance lights lit up the dark street. It’d been a silent evening until its arrival. Two paramedics rushed up the concrete steps to the midnight blue steel entry door on the far side of the long, rectangular apartment building. The lights from the ambulance painted a brilliant hue onto the otherwise dull, gray brick building. Even the trim was gray and all of it was rusted and falling apart.

Another medic followed after, steering a gurney down the steps. Their patient was out cold and

stripped from the waist up. He had all kinds of medical apparatus on him; IVs, a breathing mask,

and a defibrillator on standby. Finally, the two medics maneuvered their patient down and into the waiting ambulance.

“Ok, what’ve we got?” barked the voice over the radio.

“Heart attack and attempted suicide,” the medic replied in a professional, matter-of-fact tone.

The ambulance pulled into the emergency department at Adams County hospital. It wasn’t a fully-equipped center, but it would have to do. The patient was near death. The doors on the ambulance flew open and the stat team ran out to greet them. In charge was a tall, handsome young doctor named Jack Larson. They ran with the gurney inside and to a treatment room. There were four people working on him at once, but Jack kept order to the chaos.

“Nurse, type and cross-match his blood and start him on Narcan.”

“What’re his vitals?” he demanded.

“Bernard Covington.” The other nurse read it from the report.

He touched the patient’s shoulder and leaned over him. “Mr. Covington? Can you hear me?” He pulled out his exam flashlight and pulled up the man’s eyelids one at a time to check the dilation.

“He’s out cold, doc. Cops said they found him like this, pills were right next to him.” One of the medics chimed in.

“How many and what kind?” Dr. Larson asked.

“Effexor, 50 mg. Had 30 pills filled, only 20 were found, and it was just filled.” The nurse drew the necessary blood and labeled it for the lab.

“Yes, sir.” The nurse prepared the needle, cleansed the wounds, and very skillfully sewed up the wounds. He wrapped them in a thick, cushy layer of gauze and laid them at the patient’s side.

Jack looked at the nurse in surprise. “A butcher knife? Damn, Bernard, you’d cut your hand off.”

He pursed his lips and shook his head.

“Alright, go prep him and pump his stomach. Keep him on constant watch.”

S. L. (Stephanie) Danielson began writing at the tender age of five. She knew it was her calling from the moment she put pen to paper. In her teens she began writing alternative works and the genre stuck. She created ever more elaborate tales and finally in her early 20’s years began to create works with her new love; male/male romance. She has since written more than 30 works both solo and collaborations).

Stephanie is classically trained in business, accounting, and HR/training, possessing both an undergrad and graduate degree. She also owned and operated Romance First Publishing where the ultimate goal was to help other unknown, as well as known authors get their start in the publishing world.

Beyond writing, her other hobbies include: painting, gaming, and spending time with her husband and two cherished cats. 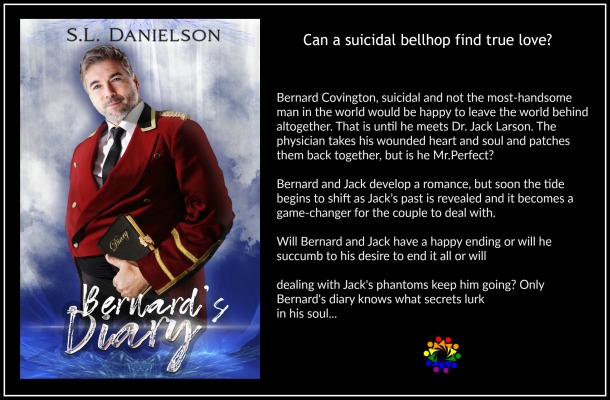 Blog Tour: “Strokes on a Canvas” by H. Lewis-Foster.