Nothing is what it seems.

A coming of age love story between the heir of the richest family in the Land of Yamato and an orphan. The human world meets the yōkai world in a power struggle for the fate of Fujiwara no Hirotsugu. While he battles to find his own path in life, Hirotsugu finds solace in a boy who will first become his secret friend, then his salvation, then, as they become adults together, the love of his life.

The story is set during the Nara period of ancient Japan and will expand over a period of 25 years (715-740).

It’s a 40-page short story and is FREE on Smashwords. 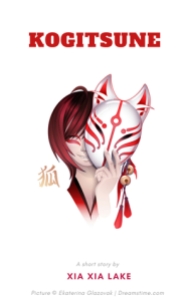 Chapter 1: Kagerō
Kagerō: The quivering appearance of the mist rising from the hot surface of the ground”

On the day Fujiwara no Hirotsugu was born, Mount Kasuga was covered in golden shimmering kagerō rising from the ground to cloak the mountain in mist. The uguisu sang from dusk until dawn, and a crane appeared in the palace garden and didn’t leave for five days.

It was late May, close to the final days of planting the rice. These were the days when finishing the paddy field work was paramount, lest next year’s crops be affected. Yet in celebration of Hirotsugu’s birth, his father, Umakai, sent an order to his bailiff to decree half a day off for all workers. Servants from the palace went down the mountain to offer rice, fish, and sake to the poor in Heijo-kyo.

Gifts poured through the gates for weeks, coming not only from the greatest families living in the land of Yamato, but also from as far away as Silla and Tang. Even the old Empress Genmei, who had no love for the Fujiwara clan, sent Hirotsugu a gift fit for royalty: a sword replica modeled after Kusanagi the Grass Slasher, the sacred imperial heirloom of the Yamato Emperors. Since it was forbidden for anyone except the reigning monarch and the High Priest of the Ise Grand Shrine to lay eyes on the real Kusanagi, no one could actually tell how good the replica was. But neither could they deny that the sword Hirotsugu received was of exceptional workmanship and extraordinary value.

The greatest gift of all came from Hirotsugu’s grandfather, Fujiwara no Fuhito. The leader of the Fujiwara clan made a secret pact with Crown Prince Obito that on the day Hirotsugu turned twenty, he would marry Princess Abe, Prince Obito’s firstborn child.

In spring, nature was at its most beautiful at dawn, when Amaterasu’s robe touched the hills and dyed them red, and the blooming cherry trees turned a vibrant pink. Hanging from the eaves of every Fujiwara castle were tendrils of purple wisteria, their blooms awakening to welcome the Sun Goddess. The white clouds above resembled boughs of cherry flowers.

When night approached, the birdsong gently shifted from cheerful to forlorn. The uguisu went to sleep in its pot-shaped nest, and the brown-feathered night thrush—recently returned from wintering in Tenjiku—took its place and claimed the night. Now and then, a deer would call and a fawn would answer back.

The day Hirotsugu was born, a young god wandered up and down the high-forested slopes of Mount Kasuga, tired from the day he’d spent blessing the fields and the future harvest. He would have gone home to Mount Kurama in Kibune, but something was amiss with the yōkai living on Kasuga and he’d come to investigate.

At twilight, he found a group of kodama and an old kappa gathered underneath the budding leaves of a giant plum tree, transfixed by its beautiful red blossoms. When he entered the clearing, they were trying to touch the blossoms, but as soon as a hand came close, the tree would raise its branches out of reach.

“Don’t touch it,” the god commanded. His voice was calm, but it came like the snap of a whip and took them out of their reverie. “It’s a ghost tree. It’s not really here.”

“When did it appear?” the young god asked.

“This morning, Inari-sama,” the kappa answered. “When the baby was born.”

“Baby?” Inari frowned. “Come closer, child, don’t be afraid. Which baby do you speak of?”

Xia Xia Lake is an Otaku & Slytherin that used to cosplay at every comic con she attended, until a kid asked if he could take a picture with the “old lady.”

She decided a couple of years ago that she wanted to spend her free time writing stories and partying with vampires.

She lives in Transylvania with her fiancé and is a big fan of Romanian cuisine.