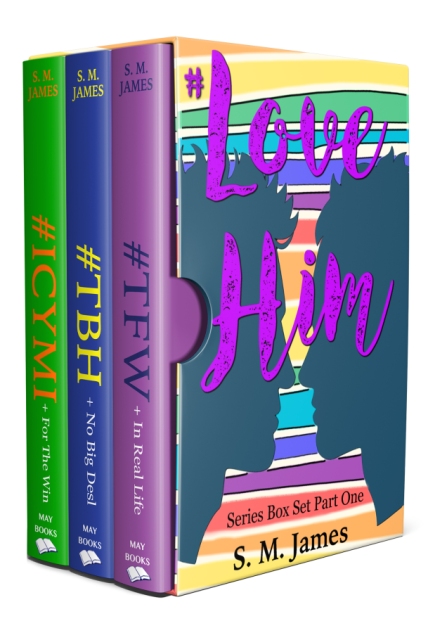 Read the first three books in the #lovehim series and their short stories.

A summer camp romance where a bi actor and a closeted ballet dancer are blackmailed into keeping their relationship a secret.

In the meet cute to To Be Honest, Angus finally gets a roommate … and a big, fat crush.

The meet cute for In Case You Missed It, Brooks agrees to one non-date with Darien because they’ll never see each other again … right?

In Case You Missed It

Love is supposed to be simple, but Brook’s secret will put their relationship to the test.

PLUS A BONUS NOVELLA NOT YET RELEASED

The sequel to That Feeling When, where Archie and Landon visit Australia and try to make their relationship work amidst judgmental family and pushy exes.


Excerpt (From No Big Deal)

I groan and give him a playful shove, not able to resist touching him, but it just makes the urge to do it again worse. “I think I’ll manage.”

I’ll manage because I don’t even watch the end. I watch Tyler from the corner of my eye. The way his chest expands with each breath, the way he scratches his nose, or rubs his arm. I catch everything.

I really need to get out of here, to put some distance between us, but I can’t. I don’t want to, which is the really messed up part.

The movie ends with that same song that’s played through the whole thing and instead of choosing another, or returning to his own side of the room, Tyler rolls onto his side, legs hanging off the bed, and tucks a pillow up under his arm.

“Okay, if you could go anywhere in the world right now, where would it be?”

I shift around so I’m facing him and try to be subtle about putting distance between us again. I lean back on my hands, my knees filling the void between us. “Tokyo.”

“Huh. I didn’t picture you for a big city guy.”

I shrug and nod at him. “Same question.”

“The Central Library in Vancouver. Reason one.” He holds up his thumb. “I get to visit another country without having to fly, reason two.” He holds up his forefinger. “I could spend my life there and never read all the books they have. Plus it looks like the Colosseum. Which I’ll never see. Because I hate planes.”

“You’re afraid of flying?” It’s my turn to try and hold back a laugh.

“I happen to have a healthy appreciation for how much it would hurt to plummet to my death.”

He considers the question for a moment. “Quesadillas, marine life, old school computer games … and you.” He shrugs like what he said was no big deal. Just a random list.

I try not to hide how awkwardly I swallow. “I guess you’re pretty cool too.”

He lets my lame reciprocation go. “So football … do you actually love it? Or is it one of those things where you tried it, you were good, and Mom and Dad were so proud you couldn’t give it up for fear of disappointing them?”

“Wow. That was oddly specific. Umm … no. It’s one of the ‘I’m an only child and my mom’s dead so Dad is proud of anything I do’ things.”

“Oh.” Tyler’s eyebrows jump up and it’s weird to see him caught by surprise. “I shouldn’t have pried.”

“Don’t worry about it. I was young, I barely remember her.”

“Do you want to talk about it?”

Tyler’s looking at me with so much sympathy it’s kind of hard to look away from. He reaches out and gives the spot just above my knee a squeeze. I feel it all the way up my leg.

“Okay, how many guys have you hooked up with?” He’s trying to take my mind off it and I’m so grateful.

“Umm … two. The first was the summer before I came out. It was kind of a confirmation, I guess. Sloppy and rushed. The second …” I rub at my mouth to try and hide the smile. “The second was last Christmas break. Dad and I went to a Christmas party with some of his work friends. I didn’t know the guy, and I know I’ll never see him again, and I think that’s what made it so hot.” I nod at him again. “Same question.”

“How many guys have I hooked up with? I can honestly say zero.” He catches my eye with a grin. “Sorry, Angus.”

He gets a laugh from me. “If you ever want to try it, you know where to find me.” I don’t know what makes me say the words but I immediately regret it. Maybe repressing my sexuality for so long isn’t the best idea.

“Obviously I meant girls, you idiot.”

“I know. I struggle to believe it myself.”

“Do you ever get lonely?” I’m not sure where the question comes from.

Tyler’s serious when he answers. “Only all of the time. Mom and Dad are super busy, and I don’t really have any friends.”

He lets loose his smile, all teeth and squinty eyes. “Except you.”

“It’s very possible you’re my only actual guy friend too. At least, the only one who doesn’t see me as the gay kid.”

“I just have so be so careful around people. Honestly, it gets pretty exhausting, but it’s safer. Like, I can’t joke around with my teammates in case they think I’m coming on to them or something. I mean, I’m not an idiot, I wouldn’t set myself up to fail by falling for a straight guy.”

“Yet you just offered to hook up with me.”

My stomach clenches and he starts to laugh but I’m kind of uneasy about it. I’d meant it as a joke—obviously—but to him … it had been too easy to say.

While not writing, SM is a readaholic and Netflix addict who regularly lives on a sustainable diet of chocolate and coffee.

BLOG TOUR: “Till Death do us Part” by Dieter Moitzi