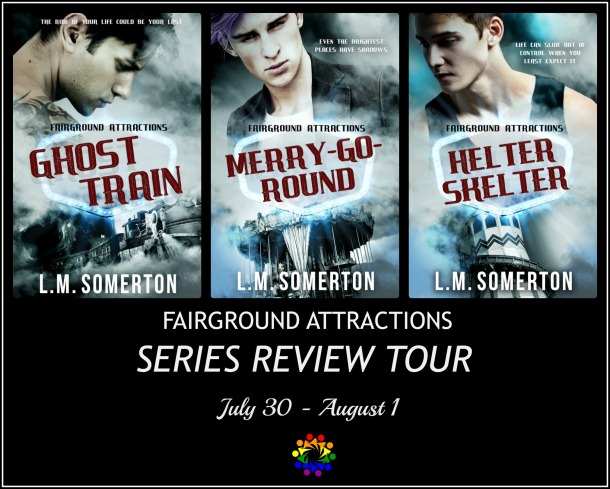 Zach, Stevie, Adam and Garth are four friends spending their summer break from university working at the local amusement park. A shared interest in kink brought them together though their personalities and preferences are as varied as the rides they run. The last thing they expect is to be drawn into a world where the thrills are more about danger and death than an adrenalin rush.

The stories are best read in order.

The ride of your life could be your last

Garth’s summer job running the ghost train at the local amusement park is supposed to be a stress-free way to earn some much-needed cash. His Goth looks are a bonus as far as his boss is concerned. The sunshine is a stark contrast to the macabre, spooky scenes inside the ride, but when one of the corpses proves to be more realistic than it should be, shadows are cast on the summer.

Clem sees potential in the moody fairground assistant with spiky hair and pretty blue eyes. He can’t wait to explore Garth’s submissive nature. But Clem isn’t quite what he seems and he might be all that stands between Garth and a violent death. Earning Garth’s trust won’t be easy in a world where secrets can mean survival. 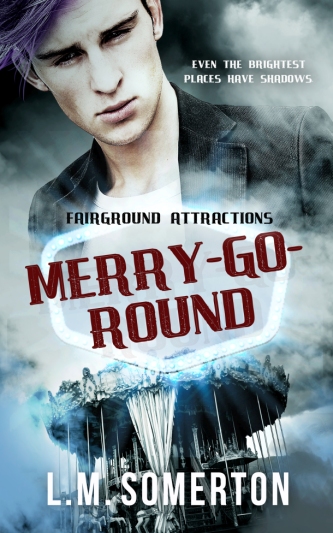 Even the brightest places have shadows.

Stevie is sweet and shy—the only hint of an independent spirit comes from his lilac hair. For years he’s harboured a crush on his best friend, Adam, who is everything Stevie isn’t. The problem? When it comes to love, Adam is a bit slow on the uptake.

On top of that, Stevie fears the escaped killer known as Harlequin is targeting his friends, and clings to his role managing the merry-go-round for some semblance of normality. But someone is watching from shadows even the summer sun can’t penetrate.

Realising that life can be all too short, Adam takes steps to ensure that Stevie will be his. All his protective instincts kick in when Stevie attracts some unwanted—and very dangerous—attention, but he can’t take care of him alone. The group of friends needs to band together because the bright lights and whirling horses of the merry-go-round won’t be enough to keep Stevie alive. Some killers are far too good at hiding in plain sight.

Life can slide out of control when you least expect it.

Of his group of friends, Zach is the only one yet to find his kinky-ever-after. The contract killer, Harlequin, is still on the loose, Zach’s dad is ill, a result of the stress caused by knowing the family amusement park is being used as an exchange point by drug runners, and Zach is faced with problems much tougher than the mathematical equations he’s used to.

Daniel Raynott has had his eye on Zach for some time. Now that Zach is no longer in his class at the university, he can act on his instincts and give Zach the guidance he desperately needs. As a Dom, Daniel demands obedience. As a man, he falls hard for Zach’s vulnerable innocence.

A boring summer has a lot of appeal, but Zach has about as much control over events as he does a trip down the helter skelter. He finds himself in danger more than once. Will Daniel be able to protect him or will the holiday season culminate in tragedy?

“Turn around,” Daniel said. “Bend over the bench.”

Zach stared at him. The expression he got in return was implacable.

“You can always use your safe word.”

Slowly, an internal debate raging in his mind about the wisdom of his actions, Zach did as he was told. The top of the bench cushioned his body. He shifted his feet wider apart for more stability. It felt strange to have his arms loose and dangling so he grasped the handle set in the side of the bench. He wondered if Daniel would tie him down and the thought made him grip the ring harder, palms sweating. When Daniel touched him, he gasped.

“Try to relax. We are going to take this as slow as you need. I’m not going to restrain you—you don’t even need to think about your safe word. You can just stand up and walk away if this gets too much.”

Daniel stroked his back, then his arse, resting his hand on the curve of his butt. “I’m going to paddle you, give you something else to think about other than your dad. The pain will focus your thoughts.” He undid Zach’s jeans then pushed them down to his thighs. “I’d prefer to do this with you naked but that might be a step too far for today.” Zach’s underwear went next, the fabric catching on his erection as Daniel rolled the cotton shorts down.

Zach trembled and his breathing sped up. He can see my arse. He’s going to spank it. Oh my God. The tip of his cock brushed the side of the spanking bench.

“Stunning.” Daniel stroked Zach’s backside. He pushed a finger between his cheeks to brush his hole and Zach’s mind blanked. “I’ll start slowly. The heat will build before it becomes painful.”

The first blow was little more than a tap. Zach sighed as Daniel built a rhythm, placing the strikes evenly on each arse cheek.

The impact increased, creating a deep-seated ache. Zach clenched his glutes, craving more. As if sensing his need, Daniel landed a blow on the crease between arse and thigh. Zach sucked in his breath.

“No, Sir. More please.” Zach lost himself in sensation as endorphins flooded his system. He humped the side of the bench, desperate for friction, and sobbed, overwhelmed by the revelation that he took pleasure from pain.

LM lives in a small village in the English countryside, surrounded by rolling hills, cows and sheep. She started writing to fill time between jobs and is now firmly and unashamedly addicted.

RELEASE BLITZ: “Master of None” by Tricia Owens.