Title: You’re My Everything

Some sweet, some steamy, and one or two will bring a tear to the eye. 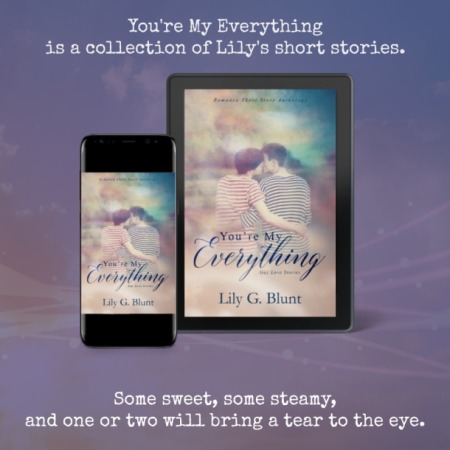 As Nathan waits for Jasper in a restaurant to celebrate their tenth anniversary, he recollects their past and some of the passionate moments he has experienced with the love of his life.

Dorian has been cast as Dorothy in his school’s production of The Wizard of Oz.

Like his character, Dorian is about to discover whether dreams really do come true.

Chris and Andreas are opposites in character. Both fear the other wants to move on.

Can being stranded on a mountainside resolve the doubt that is threatening to tear them apart?

Despite being besotted for years with Jack, Corey finds himself falling in love with Pierre, a foreign exchange student, who is staying at his home over the summer vacation. Up to this point, Jack has shown no sign that he was gay or that he wanted Corey as anything other than a friend. It is only when he sees Corey and Pierre together that Jack wishes he had acted sooner.

Service with a Smile

Terry visits a men’s designer boutique, and Ash gives him service with a smile…

Jasper is struggling to move on with his life without Nathan by his side. If only he could touch his lover one more time…

JASPER AND I first became friends at school. He moved into the area when he was thirteen and, as he was shy, I took him under my wing to protect him from the school bullies. No one dared mess with Nathan Collins and his gang. We hit it off straight away and became best buddies within a matter of weeks. The other lads, especially Kieran and Jack, were pissed off at first, but what could they say? Jasper became part of our clique, and there was nothing they could do about it. Well, they could take a hike, but I knew they wouldn’t do that.

Sometimes, it would be a group of us hanging out, but more often, it became just the two of us. We completed our homework together in our bedrooms, spent weekends in the woods hiking, or camping out in the summer months. We did everything together. Hell, we even volunteered to sweep up the autumn leaves for our parents so we could spend an afternoon with each other. Nothing could separate us. We remained friends at school for the next five years. We didn’t want or need girlfriends. We never argued. We never fell out. We just wanted to spend time together.

There were whispers, of course, but I ignored them. I knew there was nothing funny going on between us—we were best buddies. Jasper surprised me when he punched Kieran on the nose because of some snide comment he’d made. Luckily, Kieran didn’t snitch on Jasper to the headmaster. He claimed he’d bumped his nose during basketball training. However, there were no more mutterings about us from that day onwards.

We were seventeen before we had our first major disagreement. Jasper wanted to go out with a crowd of students to celebrate the end of the school year. I wanted the two of us to go to the cinema. Sulkily, I said I’d give the evening a miss. I could see he was cross with me, but he let it go without saying another word.

In the end, nearly everyone backed out for one reason or another, so it was just Jasper and Sean who planned to go alone to a pizza restaurant. I don’t know why I did it, but I decided to call another friend, Carlton, at the last minute to see if he wanted to go to the cinema with me. As luck would have it, Jasper and Sean decided to go to the cinema after their meal as well. I didn’t realise until much later that they were sitting about ten rows behind us all night.

After dropping Carlton off, I pulled into my driveway and saw Jasper waiting for me in his car. I could tell by his face he was seething but didn’t understand why. He got out and slammed the door shut before marching over to me.

“Did you have a good night?” He stared intently at me.

He didn’t answer me as we made our way into my house. My parents were out, so we took some cans of soda from the fridge and headed to my room.

“So, Carlton’s your best buddy now, then?” His face settled into a nasty sneer. This was totally unlike Jasper.

“Err… no, I just went to see a movie with him. Anyway, you went out with Sean,” I hurled back at him. We were jealous, but at the time, we didn’t know what we were feeling.

I slammed the door. Jasper let out a sob, which startled me. Until that point, I thought he was angry with me. I’d never seen him cry before.

“Jasper, what’s the matter?” I moved nearer to him. He turned from me, shaking his head, and I assumed he was going to leave.

Putting my hand on his shoulder, I eased him around and managed to pull him close. His head rested on my shoulder, and he held me against his body. We stayed like that for some time, neither of us saying anything or moving. It felt so good; I didn’t want him to pull away.

I felt a slight tickle on my neck at first, moving up towards my jaw before I realised what was happening. Jasper tilted his face towards mine. His lips brushed over my skin, leaving a seemingly scorching trail towards my mouth. He pulled back. His stormy blue eyes locked with mine, asking, pleading, questioning. I wasn’t sure exactly what he was asking, but I nodded, and his lips met mine hesitantly for a second or two. Pulling away slightly, he smiled before our lips connected again. This time it was for longer. It felt so right.

Jasper groaned. Our kiss deepened. The tip of his tongue sought entrance to my mouth, and I parted my lips to welcome him. My first kiss and one I will never forget. As our kissing became less awkward, our hands and hips moved, pulling each other closer. Soon we were panting. Our excitement rose as we crushed our bodies together.

Lily G. Blunt enjoys writing contemporary gay romance and paranormal stories. She loves to explore the relationship between two or more men and the intensity of their physical and emotional attraction. Angst often features in her stories as she feels this demonstrates the depth of feeling for each other. Lily is forever writing imaginary scenes and plots in her head, but only a few ever make it to the page.

Lily loves to hear from readers and other authors. 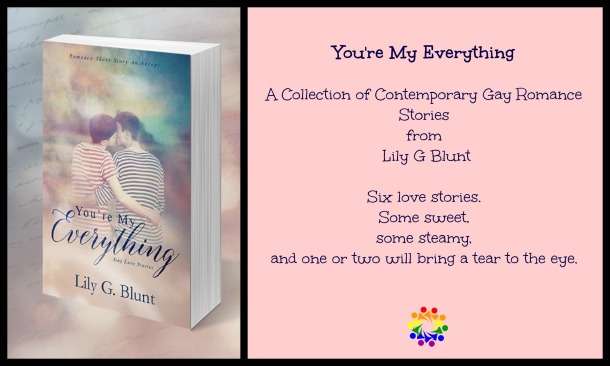 Book Title: Tainted Tales (A Dark Folklore Anthology for Save the Children)

Majority is dark PNR/Fantasy but there is dark contemporary

Heat Rating: Each story has its own flame rating.

A Dark Folklore Anthology for Save the Children

Some stories paint us sweet, told to children as they fall asleep.

Mother Earth she weaves the world with a whirl of her magic, and her kind embrace shapes us all. Father Time keeps us all, ever constant, ever moving onwards, for time never stands still.

Icy hands and a frozen touch, Jack Frost ushers in the cold snap, coating the earth with sparkly delights. If Jack brings cold, May Queen brings warmth, her delicate touch bringing forth the spring.

Follow the rainbow and maybe you’ll find, a Leprechaun with his lucky pot of gold.

The watchful eyes of Man in the Moon keeps all of the secrets of the night, shining down on us with his silvery light. The Sandman is here to soothe you to sleep, bringing all to slumber with a pinch of magic dust. Shhh, sleep now. Beware the Boogeyman lurking out of sight, waiting under your bed, to catch naughty children in the night. Be good little children, for Santa is watching, and he knows if you’ve been naughty or nice.

Tales of lore, fair music to our ears. Can you hear it? Did you know? Not every tale is sweet. The truth is darker, our stories more twisted, unlike the rhymes that children hear.

All proceeds will be donated to Save the Children.

This is a mixed M/F and M/M anthology that contains trigger warnings for its dark content.

It is intended for a mature audience of 18+.

Trope/s: Including hurt/comfort, first time, forbidden and others

It has a wide variety of tastes/themes

Watch and Learn if the Coach’s Little Kitten can be Tamed.

Follow the Doctor’s Orders and read all about Brotherly Love.

Understand Abstract Love and then take a peek at A Kink Chronicles Short.

Come, play with us.

The Kiss by A.G. Carothers

Watch and Learn by K.C. Wells

All proceeds from this anthology will be donated to

➜Sign up to become a tour host here