Genre: Contemporary M/M Romance with a Touch of
Magic

It is a standalone story and
does not end on a cliffhanger. 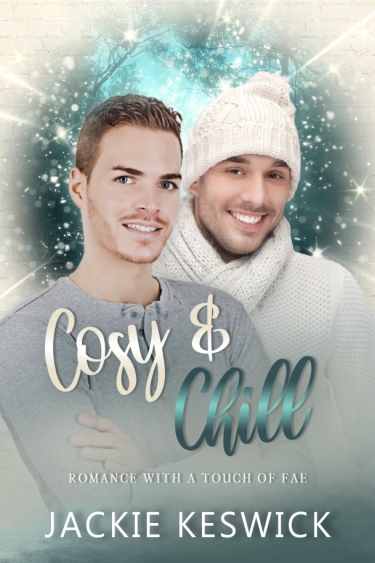 Romance with a Touch of
Fae

What does it take to change your life?

Not “manly” enough for his father, quiet, industrious Finn
dreams of his own knitting store. He needs Leo’s enthusiasm to take the steps that make his
dream come true.

Cheerful, adventurous Leo puts on a good front selling
artisan ice cream at the market, but shies away from fulfilling his grandmother’s last wish.
He needs Finn’s love and support to tackle his past and put it to rest for good.

Add a Saxon treasure, a fae stranded in the human world,
and an empty store with very unusual rental terms and falling in love is not the only
challenge Finn and Leo have to face.

But there’s magic in dreams, and all they have to do is hold on tight.

Finn’s boots squelched with every step. When he kicked
them off on his parents’ doorstep, water seeped from his wet socks. “I hate November,” he
grumbled while he hunted for his keys. “And weather forecasters.”

They hadn’t predicted this morning’s downpour, and Finn
minded that. He might have taken an umbrella had he known. Or a boat.

He’d gone to the post office to drop off his latest batch of
parcels, detouring on to the far end of the High Street to look at an empty store on the way
back. Double-fronted with a bow window, it was perfect for the shop he dreamed of. He’d
lingered in front of the dusty windows, imagining them sparkling clean, and the shelves in
the room beyond filled to bursting—until the rain had prompted him to leave.

The shop was all he could think of and if wishes were coins,
he’d have rented it already. As matters stood, he hadn’t even enquired.

Finn pushed open the door, and a ball of russet yarn with
two needles sticking through it hit him right in the face.

“How many times have I told you not to leave your prissy
stuff lying around the house?” His father bellowed at full volume from three feet
away.

Finn wanted to point out that his ears worked fine, thank
you very much, but knew that it would only make matters worse. He picked up the yarn,
grateful that neither needle had poked his eye out, and that his father’s rough treatment
hadn’t dropped any stitches.

“Sorry, Dad,” he muttered, meaning it. He’d been working
on a commission when he realised that he’d miss the parcel collection if he didn’t hurry. In
his rush to the door, he’d brought the half-finished glove in his wake. He should have taken it
back to his room and run if he’d needed to, but that was water under the bridge.

He hung up his jacket in the hallway, then stripped off his
sodden socks and his T-shirt so he could dry his feet before leaving wet footprints
everywhere. He wiped up the water on the wooden floor for good measure before he made
his way up the stairs.

If his father was yelling when it was barely five o’clock, then
the rest of the evening wouldn’t be peaceful. No doubt he’d already opened the bottle of
Scotch he’d bought yesterday.

Finn couldn’t cope with much more of this. Christmas was
two months away. His list of orders was as long as his arm and turning away new business
was not an option. He needed to work, not sit in his room, keeping half an ear out for
trouble.

The familiar, colourful clutter in his room soothed his mind.
The space wasn’t large, just roomy enough for a bed, a wardrobe, and his desk. Every free
corner held boxes and baskets filled with yarn, and he hunted for a piece he could create in
a few hours. Hats were good for that. He could knock those out in no time flat.

His order book showed two requests for hats, and both
were his favourites: custom orders.

He opened the first file to the smiling face of a young
woman with green eyes, red hair a few shades darker than his own bright copper, and a
spray of freckles across her nose. She’d requested a hat in a flattering style, but had
specified nothing else. Moss
green, his mind supplied immediately.
Mohair. A close-fitting hat with a swirl
pattern.

Suddenly excited, he went rummaging under his desk for a
skein of moss-green yarn that showed tiny speckles of deep red here and there. He stuffed
the yarn into his messenger bag along with his needle case, a measuring tape and the

customer’s measurements. Then he changed into dry clothes and checked the weather. The
rain had let up a bit, and Finn hoped he could make it to the pub without getting soaked
again.

His father was swearing at something on the telly, as had
become his habit. Finn tiptoed out and breathed a sigh of relief when he stood in the rain.
Everything set off his father’s temper these days. Especially Finn.

He really should move out. He would move out. As
soon as he’d saved enough to afford the rent on a small shop with a room where he could
sleep. Maybe then, his father wouldn’t be so angry all the time and his mother would smile
again.

Three hours later, the moss-green hat was nearing
completion. Warm through after a dinner of steak pie and chips, and nursing a second beer,
Finn felt almost happy. He was a familiar sight in the Crown & Anchor, tucked into a
corner with his yarns and needles. It was a place where he could work without fear of
interruption, and he’d been coming here ever since his father had lost his job and started
drinking.

Food and peace weren’t the only things to recommend the
pub. It was a great place to pick up commissions. People always looked for unusual,
one-of-a-kind gifts, and he’d made christening gowns, blankets, baby clothes, scarves, hats,
gloves, even Christmas ornaments.

The crowd was friendly and Annabelle, who held the pub’s
license and worked at the bar that night, was more supportive than his parents had ever
been. He’d made her a long cardigan, wine- red yak with a touch of silk, and she was
perfectly happy for him to sit in his corner and knit. She even recommended him to friends
and customers.

He hadn’t shared his dreams of owning a yarn shop with
anyone, but maybe it was time to change that. He was working up his courage to ask her
about business loans and setup grants, but he’d wait until she’d finished speaking to the guy
leaning on the bar.

He had broad shoulders that tapered to slim hips, a trim
backside, and long legs. A fisherman’s rib
jumper, Finn’s mind suggested.
Navy blue AAran. Or tweed, indigo with gold
speckles. With a high collar to show off that
long neck and let the slightly too long blond hair pool like gold against the blue.

He was explaining something to her, talking not just with
his hands but with his whole body. There was passion in that lithe form, something bright
and shining that held Finn’s interest until he realised he hadn’t stopped staring at
all.

He dropped his gaze to his newly finished hat and tried to
focus on the pattern, the run of the yarn. It would suit the lady who’d sent the photo. It
would frame her delicate face, set off the striking hair, and bring out the green of her eyes.
He knew the hat would find favour with her, but—for once—knitting couldn’t hold his
mind.

The blond man at the bar drew his mind and his eyes, and
Finn caught the moment when all that passion fell to ashes. The man’s shoulders slumped
and one of his hands dropped to his side.

Annabelle watched him with an apologetic smile as he
returned his dishes to his bag. She pulled a beer for him and handed it across the
bar.

For a heartbeat, he appeared as if he was going to refuse.
Then he dipped his head in thanks and reached for the glass. He slung the strap of his bag
over his shoulder and turned away from the bar.

In a move that surprised him by its daring, Finn caught the
man’s gaze, flicked his own to the empty seat at this table. He’d never been so brazen
before, but something in the man’s wary determination spoke to him. He wasn’t sure what
the blond man saw, but he came over and set his beer on the table.

Jackie Keswick was born
behind the Iron Curtain with itchy feet, a bent for rocks and a recurring dream of stepping
off a bus in the middle of nowhere to go home. She’s worked in a hospital and as the only
girl with 52 men on an oil rig, spent a winter in Moscow and a summer in Iceland and finally
settled in the country of her dreams with her dream team: a husband, a cat, a tandem, a
hammer and a laptop.

Jackie loves unexpected
reunions and second chances, and men who write their own rules. She blogs about English
history and food, has a thing for green eyes, and is a great believer in making up soundtracks
for everything, including her characters and the cat.

And she still hasn’t found the place where the bus
stops.

For questions and comments, not restricted to
green eyes, bus stops or recipes for traditional English food, you can find Jackie Keswick in
all the usual places

Enter the Rafflecopter
Giveaway for a chance to win a