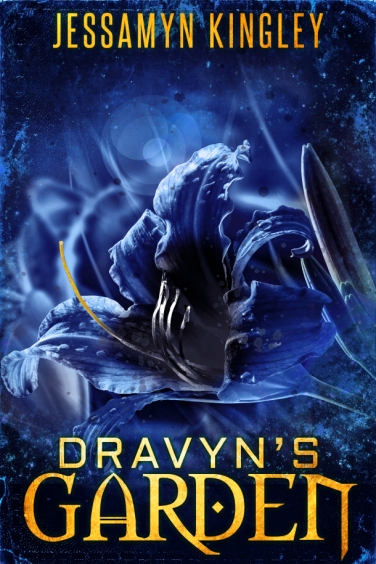 In one extraordinary garden, is it possible to grow love?

Drindyr Duke Dravyn D’Vairedracon is is a quiet man who finds happiness amongst his plants. His affinity for living things astonishes those around him since he doesn’t have a drop of druidic blood in his veins. Awed by his talent, his family grows convinced that someday when Fate pairs him, it will be a druid that is at his side. Someone to care for and who shares his love of gardening would be a dream come true for Dravyn.

Killian the Dwyer is a man broken and his secrets are plenty. Once the leader of the Circle of Druids, he handed off his duties and escaped, his whereabouts unknown. Rumors abound that he makes his home high in a tree in a faraway land. He is missed, and many who care for him reach out to no avail. Full of pain and taking comfort in his solitude, Killian only leaves the sanctity of his leafy abode to answer an invitation he finds himself unable to ignore.

Killian makes his first public appearance in centuries, and when he locks eyes with Dravyn, they discover they are mates. Astonished, neither man says a word and Killian retreats. Two and a half years of silence on Killian’s part have passed, and Dravyn is tired of waiting. He wants the other half of his soul but is convinced Killian won’t do for the job. Fearful of what the future holds but afraid of defying Fate, Killian cannot help being intrigued by the talented dragon. As they settle in Dravyn’s expansive garden, if the pair can find common ground, they might just discover the seeds to grow a love without limits.

Yanking off his gloves, Dravyn crammed them into the back pocket of his cargo pants. Crossing his arms over his chest, he waited for the guy to cross the distance between them. He was the last person on this planet Dravyn wanted to see, but if he wanted his freedom, he was going to have to deal with Killian the Dwyer.

“This is an amazing garden for a dragon,” Killian said once he was a few feet from where Dravyn had his boots planted into the sandy dirt.

“What exactly do you think we are known for?” Dravyn asked, wondering why the hell they were having this weird-ass conversation. He didn’t think Killian could be any more condescending if he tried.

“The obvious answer is for going from man to beast.”

“And when we aren’t in beast form, what is it you think we do?”

“You live in a tree; do you know anybody?”

“What’s wrong with living in a tree?”

“Look, I don’t give a shit where you live. What are you doing here?”

“I thought that would be obvious. We’re mates. I’m here to see if we can make things work.”

“I wrote you letters for two and a half years. You ignored them,” Dravyn pointed out. “So, excuse me if I’m surprised you have any interest in Fate.”

“Apparently on their own sweet-ass timetable, with no concern for anyone else’s feelings.”

“I know you’re angry, and you have every right to be but—”

“But nothing, Killian the Dwyer. Go back to your tree.”

“I have a lot of explaining to do and—”

Killian’s brownish-green eyes with their interesting glints of gold narrowed. His face was even more remarkably handsome than Dravyn recalled, which only pissed him off more. The glossy hair was shaggier, and he seemed to have forgotten to put on shoes, but Killian was a perfect male specimen of lanky proportions. “Are you going to let me finish a statement?”

“You can talk all you want,” Dravyn retorted. He pulled his gloves out of his pants and tugged them on. “I’ve got work to do. Take your damn plants back too, I don’t want them near my garden.”

“I wasn’t going to leave them behind, so I’m going to need space in your precious garden.”

“Nope, get lost. You’ve got experience in that. Like when you walked into a ballroom and refused to acknowledge your mate, then teleported home to your tree.”

“You seem very bitter about the tree thing.”

“Must be nice to ignore your responsibilities and hide in a tree.”

“You heard me. Now beat it so I can work,” Dravyn growled as he crouched to check on his hybrid. There was no way he was going to lose another one. This plant had taken over a year of work to create, and each time he took one out of his cramped greenhouse, it refused to bloom and died. He wanted to give a cutting to Ellery for his solarium, so he had to solve this puzzle.

Dravyn rocketed back to his feet and whipped around. “Our room?”

“I’m guessing you don’t sleep in a tree, as you’re strongly opposed to anyone occupying one. I promise you it doesn’t hurt the tree in question.”

“I’m not opposed—shit, who cares. That’s your business, not mine. What you aren’t doing is sleeping in my room.”

Killian took off and marched toward the deck that accessed Dravyn’s section of the house.

“Hey, where the hell do you think you’re going?” Dravyn demanded as he stalked after the sexy druid.

“Stay away from it,” Dravyn snarled, but Killian was already thundering up the wooden steps.

“Wow, you hypocrite. Look at this,” Killian crowed once Dravyn got up to the wide deck. “That’s a bed in a tree.”

Killian stuck his head into the open doors of Dravyn’s sitting room. “Indoor and outdoor living. Very nice. Oh, and there are two beds, so we don’t have to share right away.” Killian dropped his bag on the one nestled in the tree. “I’ll take this one until we get to know one another better.”

“You aren’t sleeping in my room.”

“It was until you marched into it.”

“It’s okay, we have to try. We might not be able to make this work, but at least we’ll have given it our best shot.”

Dravyn shook his head and pulled his baseball cap lower, over his eyes. The druid was stubborn, and he wasn’t going to sacrifice his hybrid for this asshat. “You need to go. Take your plants, your bare-ass feet, and get lost.”

Killian’s gaze dropped to his toes as Dravyn stomped back down the stairs. “I hate shoes.”

“Okay, I deserve that,” Killian called after him.

“You should also think about a haircut.”