This is a box set of three
stories that were previously published individually.

The three books in the trilogy,
together, stand alone with no cliffhanger.

Once upon a time, two
handsome young princes fell in love, faced down adversity, and lived happily ever after. Until
one romantic evening, they unwittingly ate a confection laced with a mind-wiping
toxin.

In this light fantasy world, four realms have settled into an
uneasy peace. A surprise twist to a prearranged marriage agreement spawns this story of
unexpected love, newfound courage, and heroic adventure. Join Princes Efren and Marcelo
on their heart-warming journey as they sort through misleading twists and turns to defeat
devious foes. Twice! Contains the stories:

The Contingency Plan: An untimely death throws a
marriage arrangement, the final phase of a treaty, into disarray. Now the Crown Prince of
Zioneven can make his own choice from among the princess’s younger siblings. As a royal
son in the matriarchal sovereignty of Sheburat, Prince Marcelo grew up knowing Royal sons
never married. Never. Period. Except Prince Efren isn’t from Sheburat, and he has other
plans.

The Best-Laid Plans: A death that wasn’t what it
seemed … A kidnapping that isn’t what it seems … Time is running out. Enmeshed in
political intrigue, death, and a kidnapping, will Prince Efren untangle the web of clues in time
to save his naïve young husband, or will Prince Marcelo dig deep to discover a previously
untapped inner strength and determination to facilitate his own survival?

Change of Plans: Once upon a time, two handsome
young princes fell in love, faced down adversity, and lived happily-ever-after… until one
romantic evening, they unwittingly ate a confection laced with a mind-wiping toxin. Are their
chances at rekindling their love doomed? Or will their ignominious new beginning propel
them toward a more teasingly fun rapport?

With everyone now in attendance, Queen Giselle stepped
forward. “Your Royal Highness, Ladies and Lords, and people of Zioneven, please accept our
warm welcome to Sheburat, and I hope you’ll accept our sincere apology for the chaos in
which you find us today.”

Prince Efren inclined his head. “Of course, Your
Majesty. On behalf of Zioneven, I offer our heartfelt condolences on the loss of your beloved
daughter.”

“Indeed.” Prince Efren kept his reply short, perhaps
diplomatically leaving it to Queen Giselle to either further the conversation toward whether
or not he was ready to choose his alternate, or to wait for a time when her grief would be
less immediate.

His mother would put diplomacy first, Marcelo
didn’t doubt that. The conversation may or may not happen today, but it would occur during
this visit. Diplomacy always came ahead of personal concerns.

“Although disappointment caused by the
cancellation of the wedding we’d expected tomorrow is unavoidable,” Queen Giselle said. “I
hope you’ll find a small comfort in knowing that you may now make your own choice of your
future bride from among my younger daughters rather than the arrangement made on your
behalf at the tender age of five.”

“Sibling. The terms of the treaty specify I may
choose an alternate from among Princess Marcela’s younger siblings. It didn’t restrict the
choice to daughters.”

Marcelo stiffened. What in the world could Prince
Efren mean by that? Men didn’t marry men. At least, he’d never heard of such a thing
occurring in Sheburat. Marcelo wasn’t alone in his bewilderment. Everyone on his side of the
room stilled. None of the faces opposite them exhibited confusion. Was that an acceptable
option in Zioneven’s culture?

It was only by mere minutes, but Marcelo did
qualify as a younger sibling to Marcela.

For the first time in Marcelo’s recollection, his
mother faltered. “Do…surely…but…”

Marcelo turned his head toward her, his wide eyes
silently imploring her to voice an objection. Kemble may have recently grown complacent
thinking herself in the clear, but she’d at least spent her life knowing she was the likely
backup plan.

As a royal son in this matriarchal society, Marcelo
had grown up knowing he would never marry. Never. Royal sons did not marry.
Period.

He’d been perfectly happy with that knowledge
because he’d never experienced the attraction that men outside the royal family felt toward
women. In fact, he’d enjoyed knowing he would not have to merge his life with a woman’s
with the expectation of having to bed her.

His gaze flicked back and forth between Queen
Giselle and Prince Efren before settling on the prince. Prince Efren had kept his eyes locked
with the queen’s, but as if sensing Marcelo’s scrutiny, his head turned to reflect Marcelo’s
regard.

Marcelo’s heart thudded so vigorously in his chest,
surely everyone in the room must hear it. His respiration quickened. That single word
uttered by Prince Efren had shattered Marcelo’s understanding of everything he knew about
the world and had expected in his life.

Queen Giselle remained frozen for a few more
moments, her brows drawn together as she processed the unexpected direction of this
discussion. She cast a brief, apologetic glance toward Marcelo, then lifted her shoulders in a
barely visible shrug. “The treaty does indeed use that word. Prince Efren, the choice is
yours.”

Marcelo’s stomach dropped as her words echoed
through the silent hall even though he’d known in his heart that she’d put Sheburat before
her son’s individual concerns. So, he felt no personal betrayal. It was who is mother had to
be.

Prince Efren continued to stare at Marcelo as he
firmly stated, “I choose His Royal Highness, Prince Marcelo. The wedding will proceed
tomorrow as planned.”

Marcelo swayed as the blood drained from his face.
How could this be? How did such a marriage work? Would he be expected
to—

“Marcelo?” Suky’s whispered tone voiced her
concern. “Are you unwell?”

She repeated the words, but from farther away. Or
did her voice only seem distant? He wobbled as the people around him faded, and then,
thankfully, this nightmare all went away.

Rainbow Award winning
author Addison Albright lives smack dab in the middle of the USA. Her stories are gay
romance in contemporary, fantasy, paranormal, and science fiction genres. She generally
adds a subtle touch of humor, a dash of drama/angst, and a sprinkle of slice-of-life to her
stories. Her education includes a BS in Education with a major in mathematics and a minor in
chemistry. Addison loves spending time with her family, reading, popcorn, boating, French
fries, “open window weather,” cats, math, and anything chocolate. She loves to read pretty
much anything and everything, anytime and anywhere.

one of five ebooks from
Addison’s backlist 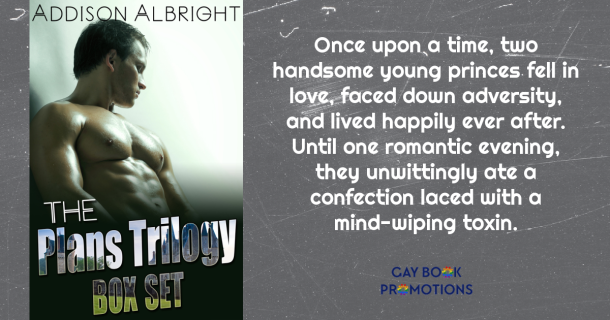