The Asylum Fight Club by Tibby Armstrong and Bianca Sommerland 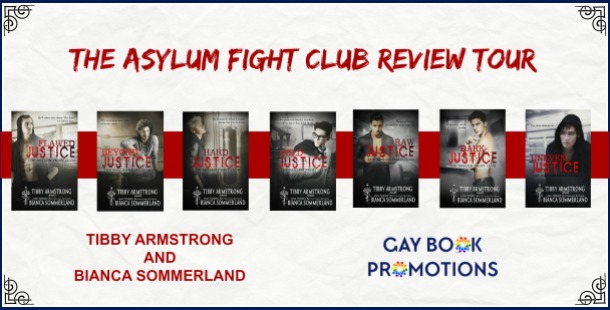 A place where men live and love by their fists—and ropes are for more than just the ring—The Asylum Fight Club isn’t the easiest place to live or work, but it’s a haven and a home for three men who’ve put their livelihoods—and lives—on the line to build a members-only gay sanctuary.

At the heart of The Asylum, Lawson Gaumond, Noah Leonov, and Curtis Smith, are three ex-lovers with one mission: to protect those they care for at all costs in an often unforgiving world of violence and vice.

They are three men, with one vision. Their bonds forged in blood. Fated to be together. Forever.

Note: Depending on the book it could be either 4 or 5 but they aren’t erotica, so the sex is detailed, but part of the story, rather than the focus of the story.

It’s best to read the stories in order.

He’ll either take down ‘The Law’. Or fall for him.

It can be read as a standalone

If there were an emergency number for adulthood, Matt Kincaid would have dialed it months ago. Raising his kid brother alone is already an uphill battle, nevermind when an ugly gang initiation lands the teen in lockup. Again. Only, this time for a hate crime against a local fight club, where settling debts isn’t taken lightly. When the club offers to let Matt risk everything in a long-shot match with a man who’s as brutally handsome as he is tough, he jumps at the chance.

If Matt wins, all will be forgiven. If not? Well, he might as well move in, because ‘The Law’ will own his ass…for a very long time.

There are no limits to what Lawson ‘The Law’ Gaumond will do to protect the club he and his former lovers built. An inner-city sanctuary where Anniston Falls’ gay leather culture thrives, The Asylum Fight Club isn’t an easy place, but it’s home. Taking on a local hothead whose younger brother vandalized the space isn’t high on his priority list, but there’s something about Matt that cries out for a firm hand.

Lawson’s never backed down from a fight, and he’s not about to start when there’s no way he can lose.

When renewed gang violence erupts, spilling blood over The Asylum, Lawson and Matt must confront their pasts to find a way forward. Gunshots and knives should be harder to survive than this rough love, but coming to the ring armed with nothing but the truth is their greatest challenge of all.

The most important fight is for the truth.

Raised and trained by The Asylum Fight Club’s most infamous owner, Reed Dane is almost untouchable. Might sound dope, but there are disadvantages to his ‘privileged’ status. His guardian’s reputation makes a serious relationship impossible—turns out the club’s members are addicted to breathing—and the one man Reed truly wants sees him only as a stray his former lover brought home.

An endless string of one-night stands lacks the intimacy Reed craves, but at least edgy post-fight hookups distract him from what he’ll never have. Until he takes a wrecking ball to the walls that set him apart.

Curtis Smith is a lot of things—MMA fighter, club owner…son of a drug lord—but one thing he’s not is prepared to face temptation exploding past his carefully built boundaries. Reed is forbidden, to him most of all, but resisting what they both want becomes impossible with the sub challenging him at every turn. And with his past threatening everything The Asylum has been built to protect, Curtis can’t afford to be addicted to Reed’s brand of candy coated sin.

He can’t deny himself one taste before his stolen time runs out. Because when it does, all that will be left behind for Reed is a memory…

He thought he’d had it rough, but he has a lot to learn.

Scandalous headlines threaten to turn Jamie Kent from a pop star to a pariah on the regular, but this latest one is a little too close for comfort. The Asylum Fight Club seems like a good place to hide out…until he has to prove he belongs—deep in a lifestyle with a contract and rules he breaks within the first five minutes. Staying means complete surrender, but a lifetime scripting love songs didn’t prepare him to give his heart to the one man who claims everything he has to offer.

The day he returns from prison.

Reputation has its own kind of power in a place where pain and pleasure depend on who’s in control. Entangled in the lives of those he’d give anything to protect, Noah Leonov rarely takes chances, but the hardened fighter refuses to abandon the vulnerable new sub to vultures who could tear his life apart with a camera flash. With the cage where he spent two years fresh in his mind, Noah won’t trap the man he loves in his brutal world. Jamie deserves the glamour and fame, where he can have more than a broken man can provide.

He belongs in the spotlight.

Neither man ever had the choice to decide their own destiny. Imprisoned by the roles they’re forced to play, their key to freedom might be to do the unexpected.

One game cost him his freedom, now all he has to lose is his heart. 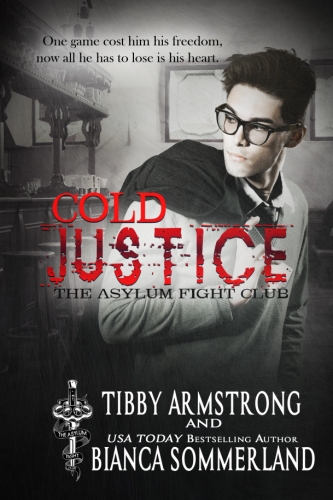 Breaking a few rules didn’t seem like a huge deal.

With his name on several government assasination lists, Wren Gibson’s prison sentence might’ve been the shortest in hacker history, until an unlikely rescue lands him behind the sturdy brick walls of The Asylum Fight Club. Where everyone can game the rules, yet he’s forbidden from even placing his piece on the board.

But one Dom tempts him to gamble everything.

The Asylum’s resident, on-call medic, Jared “Doc” McCleod is familiar with the histories of every man who crosses the club’s threshold. Their pain, their fear… Of them all, only Wren has held on to his secrets, a fascinating contrast with how completely he gives up control. As the general on the front lines of The Asylum’s internal and external battles, it’s Jared’s duty to make certain the quiet sub with soulful brown eyes doesn’t fly under his radar for long.

Showing his hand could cost them both.

When Jared takes on the task of helping Wren recover from an unexpected injury, Wren begins to wonder. While the Dom is tending to everyone else, who is there for him? To show Jared he can be the sub he needs, he would willingly light himself on fire. For an ex-con with a target on his back, risking that kind of notice is a dangerous strategy, but…

Sometimes, getting what you want requires going all in.

He never thought he could be more exposed.

Ambition can be deadly.

He finds more than a recipe for success.
Top-tier fighter, Dallas Stephens, enjoys a variety when it comes to play outside the ring. As a switch, he finds satisfaction at both ends of the whip. Commitment never appealed to him with relationships or careers, but Keiran’s sweet temptations whet Dallas’s appetite for more than a one-night-stand. Inside and outside of the sub’s kitchen.

Ordering off the menu can be dangerous.

As Keiran fights to establish his own place within The Asylum, threats to the club’s foundation leave both men caught in the crossfire. Love and loyalty show them they’re exactly where they belong, in the most important battle either will ever face.

Surviving it is another story.

Temptation can be deadly.

Gravity is just another force to overcome.

Renowned aerial artist Avery Dylan has a secret. He’s not who he seems to be. A mercenary by trade, he’s been activated by his handlers in a desperate move to bring down an impossible-to-reach target inside the infamous Asylum Fight Club.

When his high wire act proves easier to execute than one elusive submissive, Avery must resort to more than slithering silks and suggestive moves to breach the club’s defenses. Infiltrating its security requires sneaking past its most carefully guarded boundary—Rhodey Leonov’s heart.

But this is one drop that could kill.

When emotions distract from a mission, it never ends well. For the other guy. There are more headstones in Rhodey Leonov’s past than notches on his belt, which is a track record he lives with. Literally. Being unstoppable keeps his family safe. They may hate his methods, but so long as they’re in one piece, he can live with that.

Until an attack on The Asylum’s newest member reveals a weakness Rhodey can’t let stand. Having Avery recover in his bed for a few days could be a lethal mistake, though Rhodey’s not quite ready to reach for the shovel… Unless it’s to dig himself into the dark pit he’s escaped for so long. With a sub whose sweetness might be nothing but venom.

For both men, love isn’t an option, because falling only leads to one place…

The show must go on.

Life in the wings has its disadvantages…

One-time third-wheel in the boy-band Glam Grenade, Danny DiMarco’s existed just shy of center stage for as long as he can remember—a supporting player to two best friends who depended on him to pull their weight. While they made bank, he’s left reeling when his father’s death tangles his future in the red tape of empty contracts and drained accounts.

But the show must go on.

Jackson ‘Jacks’ Turner wears many hats, most of them gathering dust. An ex-model and an in-denial fashion designer, what he doesn’t plan to accessorize with is a newbie sub who shows up on his front doorstep looking for an introduction to the world of D/s inside Anniston Falls’ exclusive gay, members-only club.

Shea Warren is no stranger to covert ops. A Navy SEAL, he knows the ins and outs of hiding in plain sight. When Danny runs afoul of the club’s most powerful cliques on his first…and second…night as his roommate’s guest, the mission becomes clear. Protect the sweet, unassuming sub before he becomes a casualty of Jacks’ wear-em-once style.

There’s no rehearsal for this next set.

The Asylum might be more accepting of sequins and spandex than most, but Danny’s not coming to come out. In fact, with sponsors whose conservative ties pay his bills, it’s more than undesirable. It’s impossible. Except, sometimes Cupid has other plans.

Just when Danny needs to hide most, he’s headed for the last place he ever wanted to be…

When she’s not busy avoiding the gym, Tibby can be found munching on chocolate, sipping coffee, and scouring local bookstores for her next binge read.

When not reading neurotically or writing as though the fate of the world rests on her keyboard, she is either watching hockey or teaching her daughters the beauty of a classic, steel pony while reminiscing about her days in Auto Body Mechanics. Her dream is to one day own enough land to park a few junkers on so she can work on restorations in her spare time. She also wants a pony. And while we’re sharing her wishlist, owning a tank is somewhere around number 5. Not that she would use it unless there’s a zombie apocalypse, but she does like to be prepared.

Her time is balanced with utmost care between ‘normal’ family life, and being lured into the fictional realm where her characters reside. For the most part, she succeeds.

a Kindle Fire loaded with the backlist from both authors.

BOOK BLAST: “Yours, Forever After” by Beth Bolden