It is book three in the Revolutionary Hearts series

but could be listened to as a standalone. 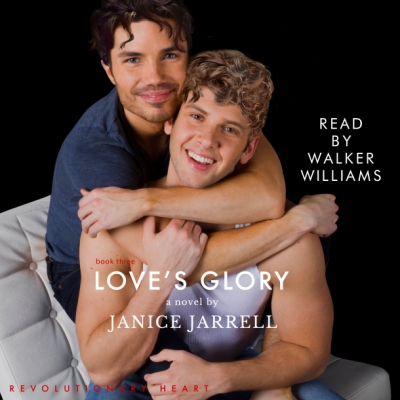 They did it all for the glory of love.

In October of 2017 cocky, alpha-male Irishman, Colin Campbell, sergeant in charge of the special assault unit of the University of Virginia Campus Police Force, dove in front of a bullet meant for a University of Virginia student. The bullet shattered his thigh and severed his femoral artery, a wound which nearly took Colin’s life and left him temporarily disabled. His infirmities robbed him of the strength and athletic prowess which had been his for most of his life leaving him humiliated and bereft.
His partner, Joshua Abrams, a doctor of psychology at the Rainier Clinic in Charlottesville, never once left his injured lover’s side. He poured every ounce of strength and love he possessed into healing the magical Irishman whom he adored and was overwhelmed with relief and gratitude when Colin was taken off the critical list. Thinking that they had survived their trial, he took Colin home, believing that their happiness was now assured.
But like many injured police officers, Colin subsequently withdrew from his partner. Overwhelmed by feelings of shame and embarrassment, he devoted himself almost obsessively to the physical therapy with which he hoped to rebuild his strength and reclaim the life he had lost. Unable to share his pain and feelings of inadequacy, he shut Joshua out, leaving him to cope alone with the post-traumatic stress he suffered as a result of Colin’s shooting.
In the following months Colin and Joshua fought to keep their relationship alive. Although deeply in love, they felt powerless to cope with the after-effects of Colin’s injuries both to his body and to his pride as a man, and to heal the emotionally devastating PTSD with which Joshua suffered.
Love’s Glory tells the story of this painful and challenging time in Colin and Joshua’s life. As we join them now, Colin is still walking with a cane and still suffering the physical after effects of his injuries. But he and Joshua are both in therapy and are now dealing positively with the emotional and psychological damage they both endured.
They face their future side by side, determined to stand or fall together, as soul mates and lovers. This book follows them on their journey as they move toward the happy future they both long to share. They have moments of anxiety and intense emotion, but you can count on a happy ending. In fact, you can count on a happy listen. In this book, Colin and his beloved Joshua have left their trials behind and now revel in Love’s Glory.
This book contains mature content including explicit sexual relations between Colin and Joshua

My name is Janice Jarrell. I am a retired grandmother who lives in Seattle, WA. I have two children and three grandsons. I’ve been writing gay romance since I was twelve years old, only back then it wasn’t called ‘gay romance’. In fact, it had no name at all. It was the fifty’s, and it was worth your life to admit to being gay, let alone confess to being a girl who constantly fantasized about relationships between gay men. Hell, I didn’t even know what a homosexual was. I lived on a farm out in the sticks in a tiny Michigan village and I’d never, to my knowledge, even heard the word. I just knew I loved the thought of boy on boy romance. I just knew that there was something hot going on between Tom Corbett and his Space Cadets and all those guys on ‘Combat’.

I wrote slash fanfiction for 30 years, writing over 337 stories, some as short as 100 words (a drabble) some as long as a series which was over 119,012 words. I enjoy writing my stories. I enjoyed the feedback I received from my readers. It was a creative release I’d been searching for my entire life and I blessed the Internet for leading me to this artistic oasis for my spirit.

Love’s Magic was my very first step into writing my own characters. I will always be grateful the slash fanfiction community for nurturing the budding author until she was ready to blossom into a fully realized novelist. It’s been an amazing thing to watch the gay community’s growth over these past twenty years. My own journey has echoed theirs in many ways, and I’m grateful to all those gay activists who fought to give the gay community the rights and privileges they always deserved.

My second contemporary gay romance novel, Love’s Trials followed Colin and Joshua on their journey as men and as a couple. The readers who fell in love with them in Love’s Magic were thrilled to see their romance continue to grow and blossom, but were forced to watch our beloved boys go through some pretty traumatic trials in this book, trials which nearly shattered their relationship. But their love proved stronger than any troubles in the end and they now move forward into the happiness they know they deserve.

In Love’s Glory, Colin and Joshua bask in the happiness that eluded them in Love’s Trials. If you’re looking for a book filled with anger, fear, and anxiety… look elsewhere. Love’s Glory is about just that… the glory of love and the continued growth of these two extraordinary men and the amazing friends who are a large part of their lives.

I’m also grateful to the gay romance community, readers, authors, publishers and promoters, who are making these, my retirement years, the most creative ones of my life. When I’m not writing, I’m traveling, walking, hiking, knitting, crocheting, and weaving, and enjoying my life here in the heart of the Pacific Northwest.