When everyone has something to hide, who do you trust?

In the military and law enforcement, the line between right and wrong is clear. Who you trust absolutely has never been questioned…until now.

Air Force Security Forces Master Sergeant Alex Thomas just got back from a rough deployment and already has a new assignment-to train a new team in everything she knows. Much to her dismay, her new team is not military but members of the Boston Police Department. When she finally meets them, she realizes why the military and local law enforcement don’t team up. Officer Jen Miceli doesn’t play by the rules and is all too willing to take risks. The two women are locked in a battle of the wills, but when the team comes across a large stash of weapons and drugs, their world is turned upside down by who it implicates. As members of the Boston PD are ambushed and friends are fighting for their lives, Alex must find a way to complete the mission and keep her team alive.

What do you do when the lines that you have always counted on become blurred? When you don’t know who to trust?

Excerpt
Her kidnappers grabbed her hair, pulled her head back, and lifted the bag off her face just far enough to take the tape off her mouth. “Yell and you will get hurt, cooperate and you will be let go.” The same voice that held the gun to her head earlier spoke into her ear. She couldn’t pick up an accent indicating where her attackers might be from, and all that she knew at this point was that they were silent, specific, and cold. Every move they made so far was deliberate, and she had no doubt that these people would follow through on any threat they made. She was getting scared. She mentally evaluated her situation—she could not feel her hands, her legs were tied together, she didn’t know where she was, and she was outnumbered at least three to one. If they would just take this damn hood off, I might be able to figure a way out of this.

“What is your name?”

“So you like to tell lies, do you?” the unknown voice asked with a hint of anticipation. “Do it.”

The chair was pulled out from under her, and the moment she hit the floor, she felt three punches, all landing in the gut. She was coughing and still trying to suck in air when she was lifted back up and on to the chair.

“What is your name?” Her captor’s voice was like the calm before a storm.

She took a minute to catch her breath and then sat straight up. “You already know, so why don’t you cut the crap and tell me what you want.” She spat out her words with as much venom and calm restraint as she could find.

“It looks like we have a lively one here.” He laughed a controlled laugh before continuing. “Okay then, what is your new sergeant up to these days?”

They are after the sarge? Not a chance in hell am I saying anything. “Who?”

“Sergeant Thomas, the woman who has been training you. What is she teaching you and why?”

She smiled. “I don’t know who or what you are talking about, asshole.”

“You will, little girl, you will. That you can trust me on.” The tape was put back over her mouth, and she was thrown back onto the floor before he even stopped speaking.

What felt like hours later, the only things that had changed were the number of times she was prodded in the ribs by someone’s boot and her temper. Fury replaced fear, and determination replaced doubt. They are not getting anything on the sarge no matter what. The “or what” was the part that she was trying to prepare herself for when she was grabbed again.

Tossed on the chair and tape ripped off again, she was asked, “What is your teacher teaching you?”

This time, she laughed. “Don’t know, I’m not a good student.”

After a short moment’s pause, her captor said, “Drink,” just before what tasted like water was forced into her mouth. “I am not going to poison you. I just want information, and how can I get that if you die of dehydration?” her captor said with a hint of humor in his voice. “Drink.”

She did her best to try and spit it out, but a hand pressed against her mouth, preventing her from being able to. For the next hour, she was made to drink water and asked the same

question. “What is she teaching you?” Jen changed her answers from simple laughter to blatant insults. “Well, I think I will just have to come back to her. Are her friends still upstairs?”

Aprille Canniff is a deputy sheriff and member of the Air National Guard. Trust is her first published novel, which she wrote while deployed to Afghanistan. She currently lives in Virginia with her wife and “ninja” cat. When she isn’t writing or working, her passion is fishing and bragging about how big the one that got away was. 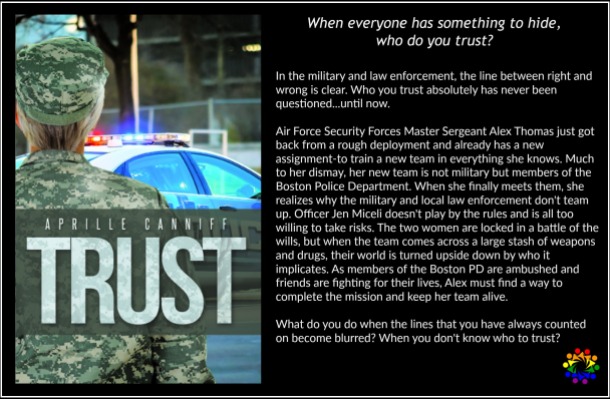 RELEASE BLITZ: “Served with a Twist” by Jet Lupin