It’s the second book in the
series but can be read as a standalone. 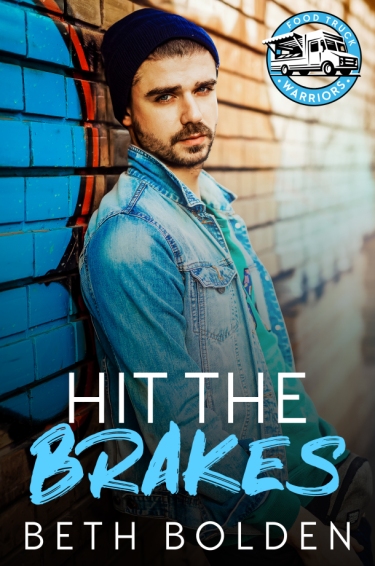 Can they fake it til Tate makes
it?

Tate Ward is in a bind. His food truck hasn’t been the
runaway success he’d always dreamt it would be. When he tries to join a new food truck

collective to gain a larger following, his sales aren’t even high enough to win a spot. What he
needs is a high profile endorsement—and he knows just the guy.

Tate never wanted Chase to know that he had the
world’s stupidest crush on him, because he always believed Chase was
straight.

When Chase offers a tempting plan that could fulfill
all his dreams, Tate knows he can’t say no. All he has to do is pretend that his very real
feelings are actually fake.

But faking it with Chase, while leading to wild
success and even wilder nights, is everything that Tate feared it would be. All it’s done is
leave him wanting the impossible: Chase’s heart.

A few minutes later, Tate re-emerged from the shiny silver truck, carrying a paper plate in
one hand and a bottle of water in the other.

He headed in Chase’s direction, and without saying a word, sat down opposite him and slid
the plate across the table.

“Rachel’s heating up the mac and cheese. It’ll be out in a second.”

“We’re out.” Tate shrugged. “Busy day. Shouldn’t have come at the end of lunch hour.”

“I had a meeting,” Chase said. One he probably could’ve canceled, but he also knew what
would happen if he’d shown up when there was a crowd here. It’d have become a circus,
and he wouldn’t have gotten a moment alone to talk to Tate.

The grilled cheese was perfectly browned and crispy, glistening at the edges with butter and
melted cheese. It looked just as good as Chase remembered, and when he bit into it . . .
bliss.

He chewed and swallowed. Wished he had about a thousand other bites. “This is even

better than I remember it,” Chase said.

Tate drummed his fingers against the worn wooden grain of the tabletop impatiently. “It’s
been ten years. I was a kid. I’ve refined the recipe since then.”

Tell me all your secrets. Please.

“Secret ingredient? Time? Patience?” Tate seemed annoyed he was here, and maybe it was
his fear of being found out but, deep down, Chase was worried it was something else.
Maybe it had only been Chase who’d been so affected by their classes together twice a
week. He hadn’t wanted to believe that was true, because he knew flirting and Tate had
undeniably flirted with him. Had always responded, even when Chase hadn’t really known
what they were doing.

Honestly, he still didn’t know what they’d been doing.

Chase finished one triangular half with three more big bites. “Well, I thought about this
sandwich a lot,” he said.

I thought about you.

Tate looked incredulous. “I made you one grilled cheese sandwich, in high
school, and you’ve been thinking about it ever since? For ten years?”

It sounded ridiculous when Tate put it like that. “Well, it was a good sandwich,” Chase
retorted. “And so is this one.”

“Does this mean you’re not going to sue us?”

Chase groaned. “I never planned on suing you. I just wanted . . .” What
had he wanted? He hadn’t let himself contemplate exactly what it was that he
wanted from Tate, hadn’t given himself the chance, but now, even with Tate seemingly
annoyed, that indescribable tension hummed between them.

He’d wanted to know that he hadn’t misremembered or imagined it after all. He’d wanted to
know if it had been real.

“No? You just came here to intimidate me?”

“Oh for God’s sake,” Chase said. “I’m not here to sue you or intimidate you or any of that
crap. Is it so hard to believe I just wanted to see you again? See how you’re doing?”

Tate stared at him. Those gray eyes—usually so warm but opaque now—had always
unnerved him. Before, in the best possible ways. But now? Chase didn’t know what to think.

“You really aren’t here to demand I stop talking about you?”

Chase shrugged. “You posted that you make my favorite sandwich in LA. Technically, it
was true. You did, just ten years ago. And now I’ve confirmed, officially, that you
still do.”

Tate tugged off his beanie and ran his hand through his hair, the auburn strands of it shining
in the mid-afternoon California sunshine. “I’m sorry, it’s just hard for me to believe that
you’re not pissed.”

“I could pretend to be pissed off if it’d make you feel better,” Chase offered.

“Most people, yeah,” Chase admitted, biting into the second half of his sandwich. “But
you’re not most people. Never have been.”

A lifelong Pacific
Northwester, Beth Bolden has just recently moved to North Carolina with her supportive
husband. Beth still believes in Keeping Portland Weird, and intends to be just as weird in
Raleigh.