Author and Publisher: A. G. Carothers

It is not a standalone story. 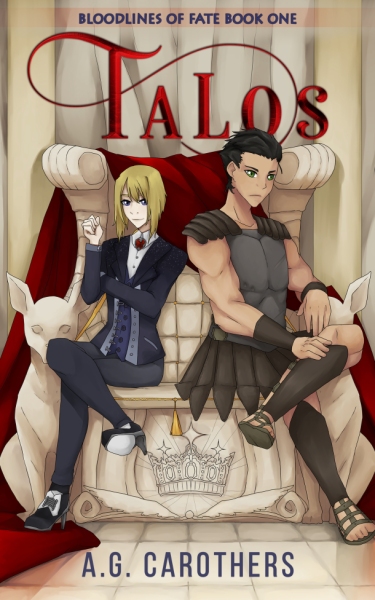 The Age of Man has passed, and a new age is upon the Earth. An age of magic and technology ruled by the supernatural beings that once hid amongst humanity has begun.

Talos – Vampyr King, Supernatural Council Member, and Despiser of Humans. Fate has a surprise up their sleeve for him.

Bayne – Raised by the human resistance, Would-be Assassin, and Despiser of Supernatural Beings. He’s ready to sacrifice himself to kill his enemy.

Bayne is thrust into a world he thinks he knows but quickly discovers his whole life has been built on lies. Talos, perfectly happy ruling his corner of the world, is faced with an unexpected and unwelcome change that comes with the mate chosen by Fate. Together they must discover how to live and, in the end, love one another. But will Fate have more in store for them than just learning to love the species they hate?

Bloodlines of Fate is a new urban fantasy series set in a world destroyed by humans and resurrected by supernatural beings. Fate has many plans for the vampires, fae, unicorns, therianthropes, and humans of this new world. While their mates may be fated, learning to love isn’t that easy.

This book contains depictions of gladiatorial combat, snarky fem twinks who will cut you, kings in stilettos, and awkward heats with a pinch of daddy kink.

Talos strode calmly into his office. His skin tingled with pins and needles all over. Odin and Majid were on his heels, and Majid closed the door behind him. Talos leaned on his teak desk as his discovery crashed into him. Claws extended from his fingertips and dug into the dense wood, marring its polished surface.

“Why of all days would this happen today?” Talos asked Fate.

“Brother, what is it?” Odin closed in and put a reassuring hand on Talos’ back, but it made his skin crawl. He shrugged Odin off and turned back around.

“It’s him.” Talos still couldn’t believe it. He wanted to race to his bedroom to confirm it, but he had to wait.

Majid cocked his head and narrowed his eyes. “What do you mean, it’s him?”

Talos looked up at Odin and realization dawned on Odin’s face. “Oh, him him?” Talos could only nod. His throat constricted.

“I knew I had to come to you, Brother. And it seems this is why. I was there when our father found his beloved, your pa.”

Talos sat on the edge of the desk, crossed his arms, and massaged his temples with one hand. Majid stepped closer, started to put his hand on Talos, then took his hand back with an apologetic smile.

“Congratulations on finding your mate, my old friend.”

Majid snorted. “He’s lucky I can’t read his thoughts like you can,” he scowled.

“Your idea to let one of the other resistance members through with him was good. It gave me an idea as to what kind of man my mate is. He was scared but he held his ground. His stubbornness to see his mission through shored him up. It’s going to be interesting to see how he reacts to spending an eternity with us leeches.”

Majid smirked. “You know how much I like a good impaling.”

“I got something you can impale.” Odin shook his butt at Majid and Talos snorted out a laugh.

Majid ignored Odin’s interruption. “Your mate jumped a little, but you’re right. He held steady even when I slowly killed that weakling.” He scoffed in disgust. “Like anyone that weak would have made it through the selection process. It’s a wonder they survived the games. They were lucky to have been killed by me.”

“It is quite an honor. I think it’s been a full month since you’ve impaled someone in the throne room.” Talos rubbed his forehead. His skin continued to tingle. “I won’t be able to bond with him until his blood is clean.”

“Gideon is having the hemodialysis machine brought to your chambers along with a bed he can be properly restrained on. The doctors estimate it’ll only take two rounds for his blood to be cleaner than when he was born,” Majid reassured Talos.

“He will fight. I have no doubt. And we will most likely have to sedate him,” Talos added.

“The sooner you get it done, the better, brother. Your body will not allow you to wait too long.”

“It’s almost dawn now.” Talos looked at the clock on his wall. “Go to bed. Majid will stay up with me to watch over my mate.” 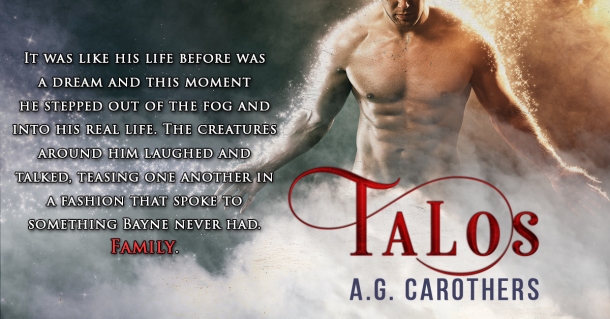 A.G. Carothers is actually a dragon very cleverly disguised as a human. They are a non-binary author of LGBTQIA Romance and Urban Fantasy, who enjoys writing original and entertaining stories. They are very excited to share the worlds they’ve created with you.

A.G. currently lives in Tennessee with their platonic life partner, who is not a dragon. They yearn to live back in Europe and will some day. In their spare time they are addicted to losing themselves in the lovely worlds created by other authors

A.G. is committed to writing the stories they see in their head without restrictions. Love is blind and doesn’t see gender, race, or sexuality. 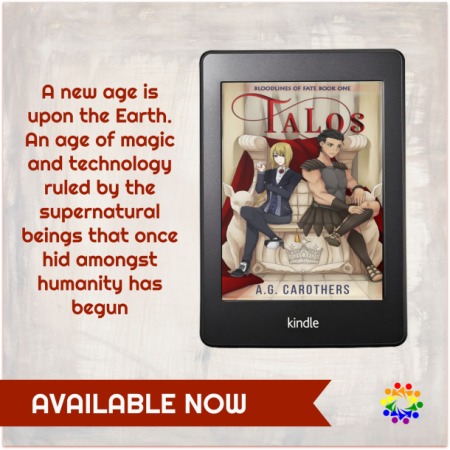 BOOK BLAST: “2037: The End of Tolerance” by Luke Mauerman